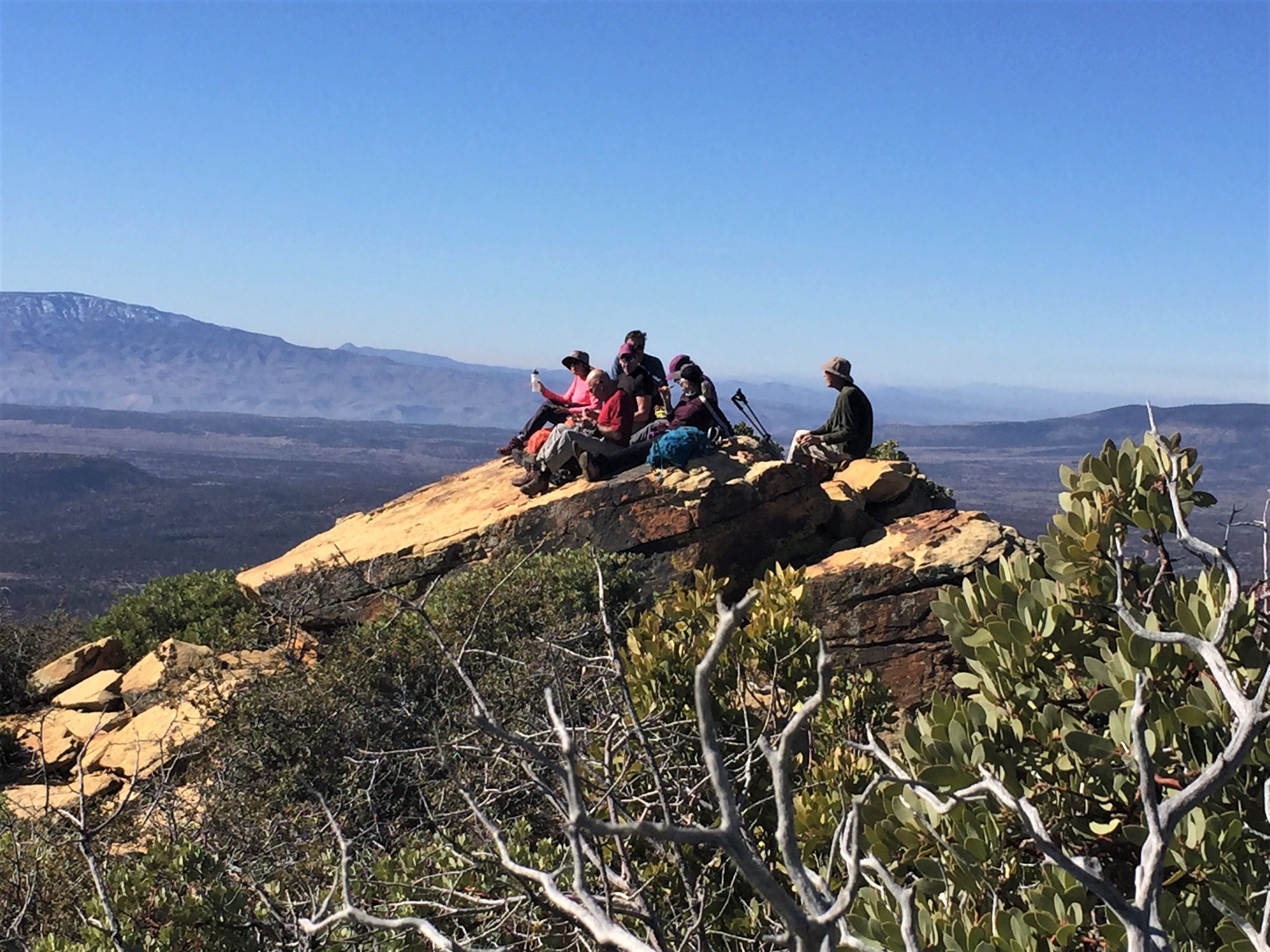 Photo courtesy of Jeff Fargo Sedona Westerners Rough Riders enjoy lunch on the summit of Thunder Mountain (also known as Capitol Butte), one of Sedonaâs major icons and hiking destinations. This spot is famous for its 360-degree panoramic views of the whole S

On a beautiful Saturday in February, the Rough Riders group of the Sedona Westerners decided to hike up Capitol Butte, commonly known as Thunder Mountain.  This was a significant challenge, since the trails to reach the summit are two and one-half miles long and require an elevation gain of 2,100 feet.  To avoid the tremendous congestion at the Dry Creek trailhead, we decided to start at the Andante trailhead.  Led by our hike leader, Deb Weinkauff, and followed by our tailgater, Chris Ostrom, we used a combination of our great local trails to reach the top of Thunder Mountain.

I had hiked up Thunder Mountain with the Westerners three years ago.  The hiking club normally schedules this hike once a year.  This year I wanted to challenge myself again and see those stunning, panoramic views at the summit.  In addition to those good reasons, I had one more.  I am a volunteer with the Verde Search and Rescue Posse (VSAR).  We work in conjunction with the Yavapai County Sheriffs Office to search for and rescue lost hikers or those who have become “ledged out.”  We have had several rescues on Thunder Mountain during the past two years, so I was using this hike to better familiarize myself with the trail.  We use the trail to get close to the person being rescued and then we bushwhack to their exact location, based on GPS coordinates.

Our small group initially hiked up to the Lizard Head, which is a rock feature on the west side of Thunder Mountain that is clearly visible from Dry Creek Road.  There we took a snack break and admired the views.  After that, we got on the Thunder Mountain summit trail and began hiking and rock scrambling our way to the top.  Two and one-half hours after we began, we reached the summit at 6,342 feet.  We took a well-deserved lunch break on two huge pieces of Coconino sandstone, which dominate the summit.  Most of us took many pictures; the 360-degree, panoramic view was stunning.  We could clearly see all the major red rock formations, as well as the snow-capped San Francisco Peaks.

On the summit, we also found something emblematic of the New Age culture present in Sedona. Someone had created a small pyramid from copper tubing, plexiglass, and crystals and had set it on the highest point of Thunder Mountain.  We were very surprised to find this small pyramid, but we immediately recognized that it probably had been brought there for spiritual reasons.  We took pictures of it and left it on the highest point.

After enjoying our lunch at one of the highest points in the Sedona area, we began our descent.  We retraced our steps carefully, due to all the loose rock and soil.  The trail is indistinct, but we were guided by cairns that had been placed there by previous hikers.  It was a challenging descent, but after two hours, we arrived back at the Andante trailhead.  We were all satisfied that we had met the challenge and felt suitably tired and sore.  We had hiked a total of five and one-half miles with a cumulative elevation gain of 2,600 feet.  Before departing, we thanked our hike leader, Deb Weinkauff, and our tailgater, Chris Ostrom, for a great hike.

So, if you are looking for a hiking challenge (the Rough Riders normally hike 8-10 miles with significant elevation gain), I recommend that you hike with the Rough Riders.  They hike every Saturday and usually hike most of the day.  If you decide to take this challenge, I’ll see you on the trail!

If you are interested in joining the club, please visit the Sedona Westerners website at www.sedonawesterners.org/membership.  Monthly meetings are only facilitated at present by Zoom until the Covid 19 threat is resolved.