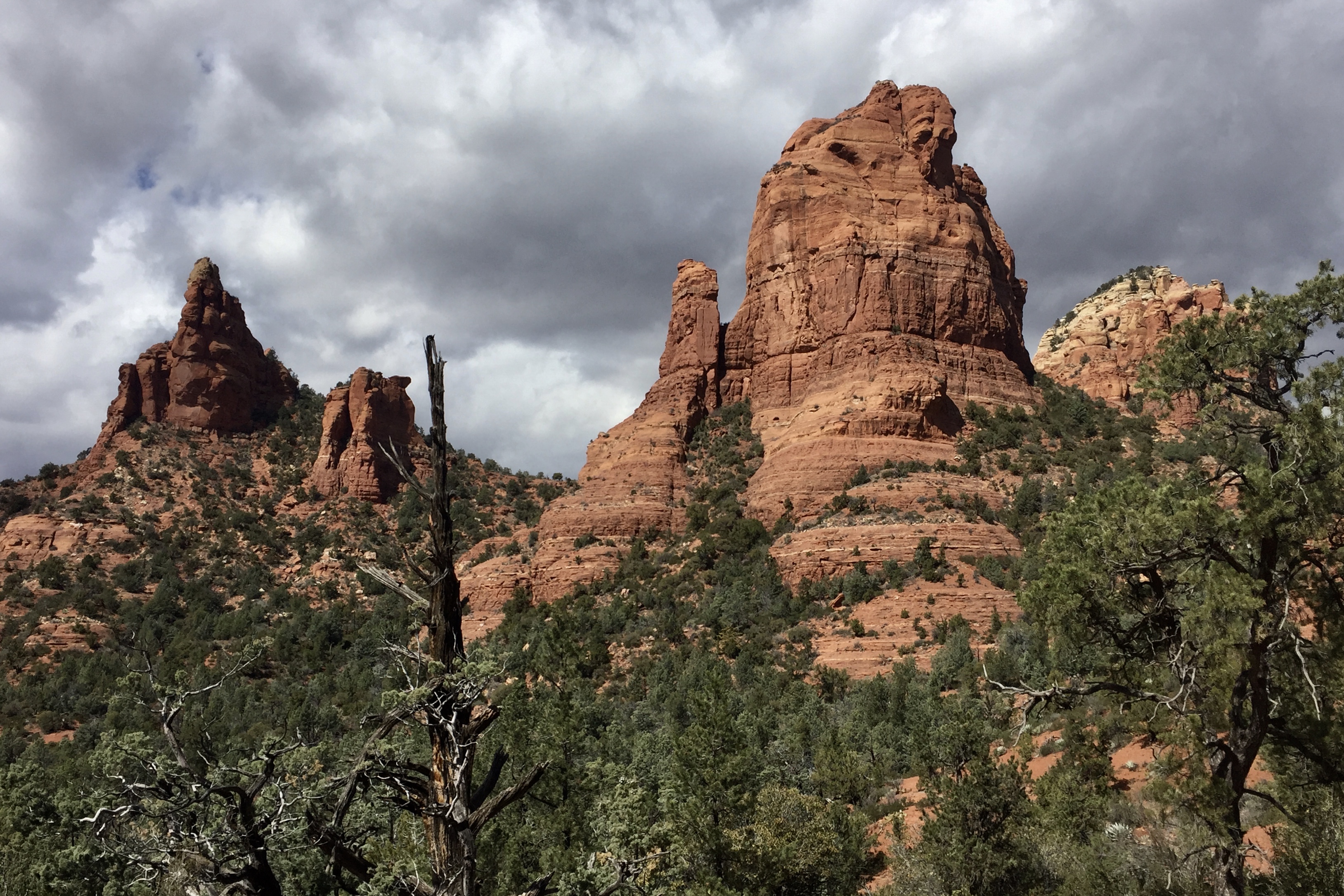 Photo courtesy of Jean Barton Two of Sedonaâs most famous red rock formations are clearly seen in this photo taken from the hilltop known as the Ant Hill, which is located near the Jordan and Cibola Trails. The Cibola Mitten is in the foreground and the Sphinx

I love the Amblers hikes! As the easiest of the Sedona Westerner’s hiking groups, my fellow hikers range from newcomers getting used to the altitude and terrain, to seasoned 80-year-olds loving the outdoors and determined to stay fit. The pace is comfortable for conversations and a bit of picture taking along the way. I particularly like seeing my old friends and meeting new ones. The red rock views that Sedona is known for never get old.

Today’s excursion was a fairly easy four-mile, clockwise loop hike on a series of trails between Uptown Sedona and Soldiers Pass, just north of SR 89A. Our total ascent during the hike was about 350 feet. We carpooled from our meet-up location at Posse Grounds Park to the Jim Thompson Trailhead, at the end of Jordan Road in Uptown. The access road is unpaved, bumpy but doable, slowly, for most cars. Parking spaces were no problem for our 9 a.m. start, but by the time we finished, the parking lot was jammed and overflowing. We divided into two smaller groups with veteran hiker Linda Schermer in the lead group and Hassan Hosseini heading the second group.

Linda told us that the U.S. Forest Service had converted a tangle of social trails into the established trail network that exists today. The morning was cloudy and cool, with moist fresh air and dry footing. It felt great to be back hiking after snow and mud had kept us temporarily sidelined. The first leg of the loop followed Jordan Trail for 0.4 miles, then we took a left on Javelina Trail, and a quick right on Powerline Plunge Trail, for another 0.4 miles. After that, I was glad that our leaders knew the way that included Manzanita Trail to Adobe Jack Trail to Grand Central Trail, which took us to the top of the Ant Hill, where we took our lunchbreak with spectacular panoramic views. The trails crisscrossed through wooded areas with juniper, manzanita, Arizona cypress, sugar sumac and scrub oak. Our route featured well-known rock formations, including the Cibola Mitten, the Sphinx, Steamboat, Ship Rock, and the Fin. In the distance, we could see Chimney Rock, Sugarloaf Mountain, Coffeepot Rock, and much more.

During the hike, we saw a Gooding’s Verbena, which was the first wildflower we had seen this season. By the time we reached Ant Hill, the sun had broken through and puffy, white clouds added to the incredible view. We passed remarkably courteous mountain bikers, trail runners, and U.S. Forest Service workers, who were repairing erosion from the recent storms. I learned that transplanted prickly pear “paddles” are a good way to revegetate worn spots. After lunch, we headed back down the Grand Central Trail to the Ant Hill Loop Trail, then on to Jordan Trail and back up through the Cibola Pass to the Jim Thompson Trailhead.

Naturally, upon completion of the hike, we followed the Westerner tradition and gave “high-fives” to the leaders. On our way back to Posse Grounds Park, our snowbird driver from Minnesota mentioned how glad she was to be in Sedona. I quickly agreed with her!

If you are interested in joining the hiking club, please visit the Sedona Westerners website at www.sedonawesterners.org/membership. Monthly meetings are facilitated via Zoom at present until the Covid 19 restrictions are lifted.