Parsons Trail Abloom In The Spring 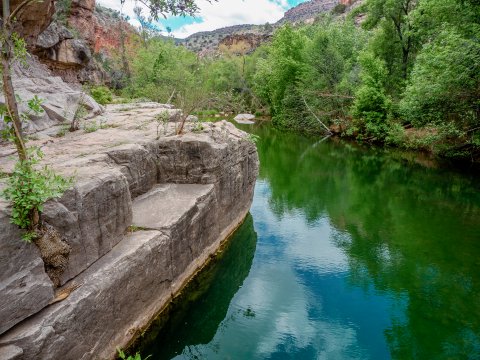 Photo courtesy of Al Gore The deep green pool of clear spring water seen above is just one of the idyllic spots that the Sedona Westerners Dogies witnessed along the trail to Parsons Spring. Springtime with its array of beautiful wild flowers is one of the mos

What could be more delightful than hiking the Parsons Trail in mid-spring! On an unusually cool, late April day in 2019, the Dogies group of the Sedona Westerners headed to Cottonwood to a 3-way assembly point for carpooling out a long, mostly paved road which becomes a dirt road for the last 20 minutes of the drive. This road runs along the Verde River, and our driver, Scott McFeely, being a member of Search and Rescue, pointed out to us the launch site for kayaks near the TAPCO power plant. The plant was built to support mining operations and has been decommissioned since the 1960s. It is near huge mounds of stable mining tailings.

The Dogies are the moderate level group of the Westerners, typically doing 5-7 miles with mild elevation gains at a moderate pace. Our veteran hike leaders, Mark DuCharme and Don Kling, assisted by tailgaters Jim Kemper and Jon Petrescu, skillfully guided us along this wet part of Sycamore Canyon (second longest canyon in Arizona). We descended about 200' right at the start of the Parsons Trail, then walked through a lush route by the water, fed by major springs, first Summer Spring which is about a mile in, then Parsons at 3.7 miles along. Beyond this, Sycamore Canyon is dry unless snow melt or rain water floods it. We could see debris and deep sand along our route, brought there by the heavy storms of the past season.

Along the way, Linda Schermer, your scribe, pointed out the numerous blooming plants: cream colored Banana Yucca in full bloom, both local varieties of Hedgehog Cactus (Strawberry, which is rose wine colored, and Claret Cup, which is red). Other white flowers included a few Blackfoot Daisies, lots of Fleabane, Peppergrass, Evening Primrose, Horehound, patches of Commandra, also called Bastard Toad Flax (which carries a blister rust which can harm the growth of the imported Mondale or Afghan Pines, which are widespread in Sedona). Both Cliff Rose and Apache Plume shrubs were in full bloom and fragrant. We noted the following yellow blooms: Desert Marigold, several mustards, Barberry shrub, and especially by Summer Spring, swathes of tall columbine. Fuschia colored blooms included Four O'Clock and a small penstemon. The only orange bloom we saw was the ubiquitous Globe Mallow. Red blooms included Paintbrush, Firecracker Penstemon, and wild bean vines. The blue and purple blooms were a highlight, particularly the deep blue Larkspur. Others included Tradescantia or spiderwort, which may also be pink or white; the small shrub Feather Dalea; phacelia; and Gooding's verbena. Tall water-loving trees such as sycamore and cottonwood were in abundance. The seedheads of Silver Puff plus the yet-to-bloom but abundant Louisiana Sage provided some cool tones.

Along with the lush plant life and flowing water, we also marveled at the lovely surrounding rocks, including dark columnar basalt, which had collapsed in places, plus red sandstone and buff-colored limestone, which had many small caves. We safely navigated the stream crossings, both going out and returning. We enjoyed a peaceful morning snack break by the "swimming hole", although no one was swimming, due to the unusually cool late April day. After our break, the trail clung more closely to high rock walls. A few hikers scrambled up a large basalt rock agglomeration. At our turnaround point, we took a leisurely lunch and returned by the same route.

If you are interested in joining the club, please visit the Sedona Westerners website at www.sedonawesterners.org/membership.  Monthly meetings are only facilitated via Zoom at present until present Covid 19 restrictions are lifted.