Westerners Mustangs Do "Up Periscope" Hike 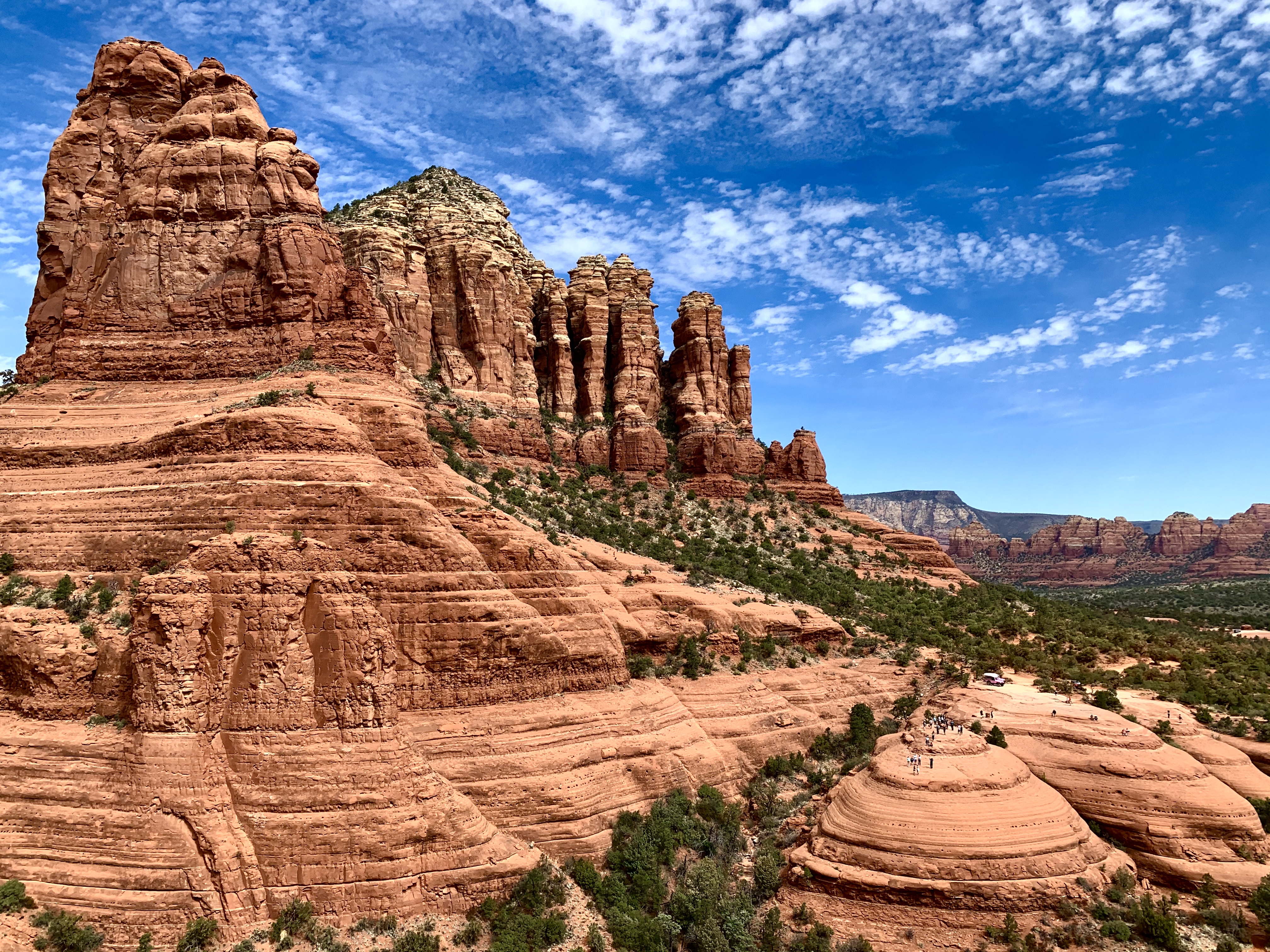 The date was April 1, but it was no joke: the Sedona Westerners’ hiking season was re-starting after a long, long hiatus due to Covid 19. The Yavapai County infection rate had fallen below the threshold that the club established for resuming hiking, albeit with continued precautions against infection.

We gathered at the Broken Arrow trail head on a bright, cool Sedona morning for a hike by the Mustangs group, which specializes in rigorous hikes with plenty of time to stop and smell the scenery.

I hadn’t seen most of the hikers in over a year and was glad to see that the friendly enthusiasm that characterizes the Westerners had survived the downtime intact. Small groups met, wearing our masks and standing suitably apart, catching up on news.  Hiking with family and close friends in small groups had kept everyone active but we were more than ready to resume walking as a club again.

After the usual reading of the club safety rules, augmented by special Covid precautions, we set out in separate groups on our loop hike. As might be guessed from the name of the hike, we explored the region around one of Sedona’s well-known features, Submarine Rock. Reaching the formation, we quickly scrambled up to the top of the “conning tower”, which overlooked the out-sized hunk of rock surfacing from the pinon-juniper forest just below the Twin Buttes. The club lore has it that this was once the site of Sedona Westerners dances, back in the early days when the organization was more of a social club than a hiking club. While the expanse of the rock is generally flat, it appeared to me that it would be rather bumpy for dancing.

Down on the deck of the submarine, our group’s leader, Jim Sweeney, pointed out a long, straight crack in the rock where the two sides had shifted several inches, evidence of tectonic activity in Sedona’s past.  I suggested that perhaps the carefully executed slash in the rock indicated that the formation was named for resembling a sliced sub sandwich instead of a naval vessel. The idea did not go over well.

Leaving Submarine, whatever it really represents, we walked up towards the canyon known as Jim Bryant. I’ve always felt that it is one of the most classically beautiful canyons in the area, and this gash in the side of Lee Mountain did not disappoint this morning. I was reminded of earlier hikes by the Westerners’ Dogie and Rough Rider groups that explored the upper reaches of the canyon. Today, though we reached only a rock outcropping near the mouth of the canyon, where we stopped for a break and to take in views of many of the famous Sedona sights: Twin Buttes, Crimson Ridge, Cathedral Rock, and in the distance, Thunder Mountain and beyond.

From this perch, we continued our hike down towards Chicken Point, a favorite destination of Jeep tours and hikers alike. There we found our lunch spot opposite the Point, where we took in from a distance the activity of a Sedona Spring Break week. We looked especially for bikers attempting the famous White Line on a sloping rock up above, but none were out today.

After lunch, we started our return but did not go directly back to the Broken Arrow parking lot. Instead we stayed high in the area of the “hog trails”, eventually reaching the top of Battlement Mesa. More fine views  appeared, this time with the addition of views back to the spectacular white rock cliffs topping the red rocks on the sides of Munds and Lee Mountains. Gorgeous!

Finally, we descended from the mesa and completed the short walk back to our cars. I think everyone felt that it was the perfect hike to restart our interrupted hiking season and expressed their thanks to our leaders, Jim Sweeney and Dennis Chisholm!