Dogies Hike Rabbit Ears via the Back Door 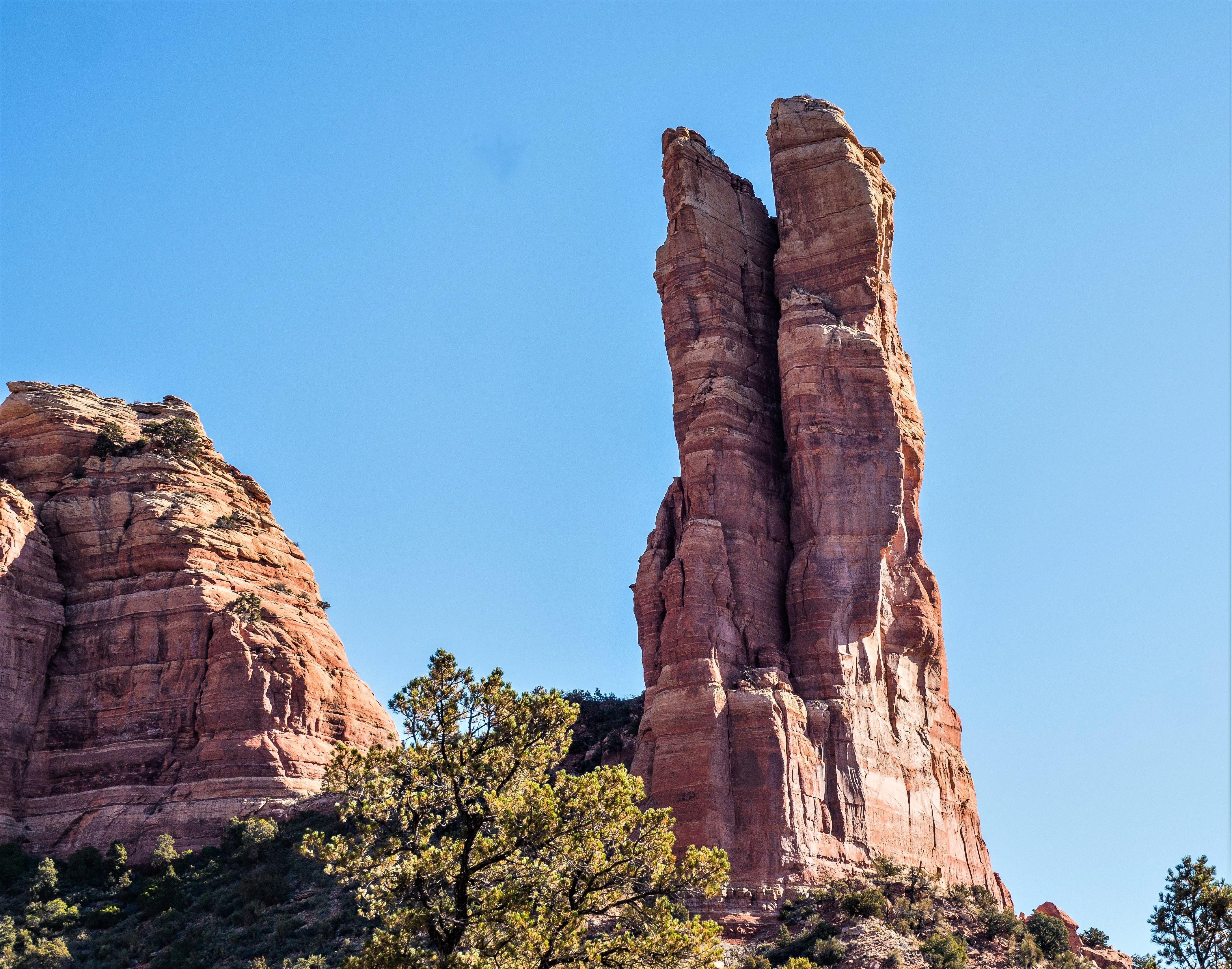 Photo courtesy of Alan Gore Rabbit Ears rock formation as seen by the Westerners Dogies from Rabbit Ears Trail, is one of the most visible and identifiable red rock formations in and around the Village of Oak Creek (VOC). It can be seen from many locations an

On April 6, 2021, the Sedona Westerners’ Dogies hiking group had the pleasure of doing a hike known as “Rabbit Ears via the Backdoor.” If you are unfamiliar with Rabbit Ears, it is a rock formation east of Courthouse Butte, at the southern end of Lee Mountain. It gets its name because it really does look like a pair of very large rabbit ears, especially when viewed from the west, say from the HilineTrail. Rabbit Ears is a club favorite that we try to do every year around Easter. (Note the theme, Rabbit Ears – Easter Bunny. We also tend to do Turkey Creek around Thanksgiving.)

Normally we hike Rabbit Ears from either the Courthouse or Bell Rock Vista parking areas. However, with increasing congestion at both those parking areas, our hike leaders Dave Minott and Penny DeJarnette, decided to change it up this year and start from the other end at the Jack’s Canyon Trailhead. (Hence the “Backdoor” in the name.) The Jack’s Canyon Trailhead parking area, though remote, offers ample parking and access to multiple trails including Hot Loop and Woods Canyon.

So, here it was 8:00 am and the Dogies set out with every intention of hiking the original Rabbit Ears Trail as scouted by Dave and Penny a week or so earlier. However, we quickly discovered that that trail no longer existed. The Forest Service had constructed a new Rabbit Ears Trail and eradicated the old one. This led to some initial confusion since we thought we were following the hike as scouted only to find that it didn’t agree with our previously recorded track. Fortunately, we quickly realized the situation and were excited to learn we were hiking a new trail.

The new trail heads north-northwest up a ridge in the general direction of Rabbit Ears. The top of the ridge offered us a spectacular view of Rabbit Ears and the valley below it, as well as Horse Mesa to the east. While up on the ridge, we found numerous pieces of fossilized coral – proof that the Sedona area was at one time at the bottom of the sea. From the top of the ridge, the trail curves west and eventually intersects with the Big Park Loop Trail. From here we headed north following the Courthouse Butte Trail which parallels a wash. Looking closely in the wash we could see the remnants of an old, long abandoned dam. Beyond the dam the Courthouse Butte Trail crosses the wash and heads northwest towards the Courthouse Vista parking area. After about a half mile we reached a rock formation called the Muffin Top, also known as the Spaceship. It is here that the group paused for a snack break and to enjoy the views of Courthouse Butte, Lee Mountain, Baby Bell, and even Cathedral Rock in the distance. After our snack, we made our return, retracing our steps back to Jack’s Canyon Trailhead.

If you are interested in joining the Westerners club, please visit the Sedona Westerners website at www.sedonawesterners.org/membership. Monthly meetings are only facilitated via Zoom at present until the Covid 19 restrictions are lifted.