Sedona Westerners Dogies Hike Many Knolls along the Transept Trail 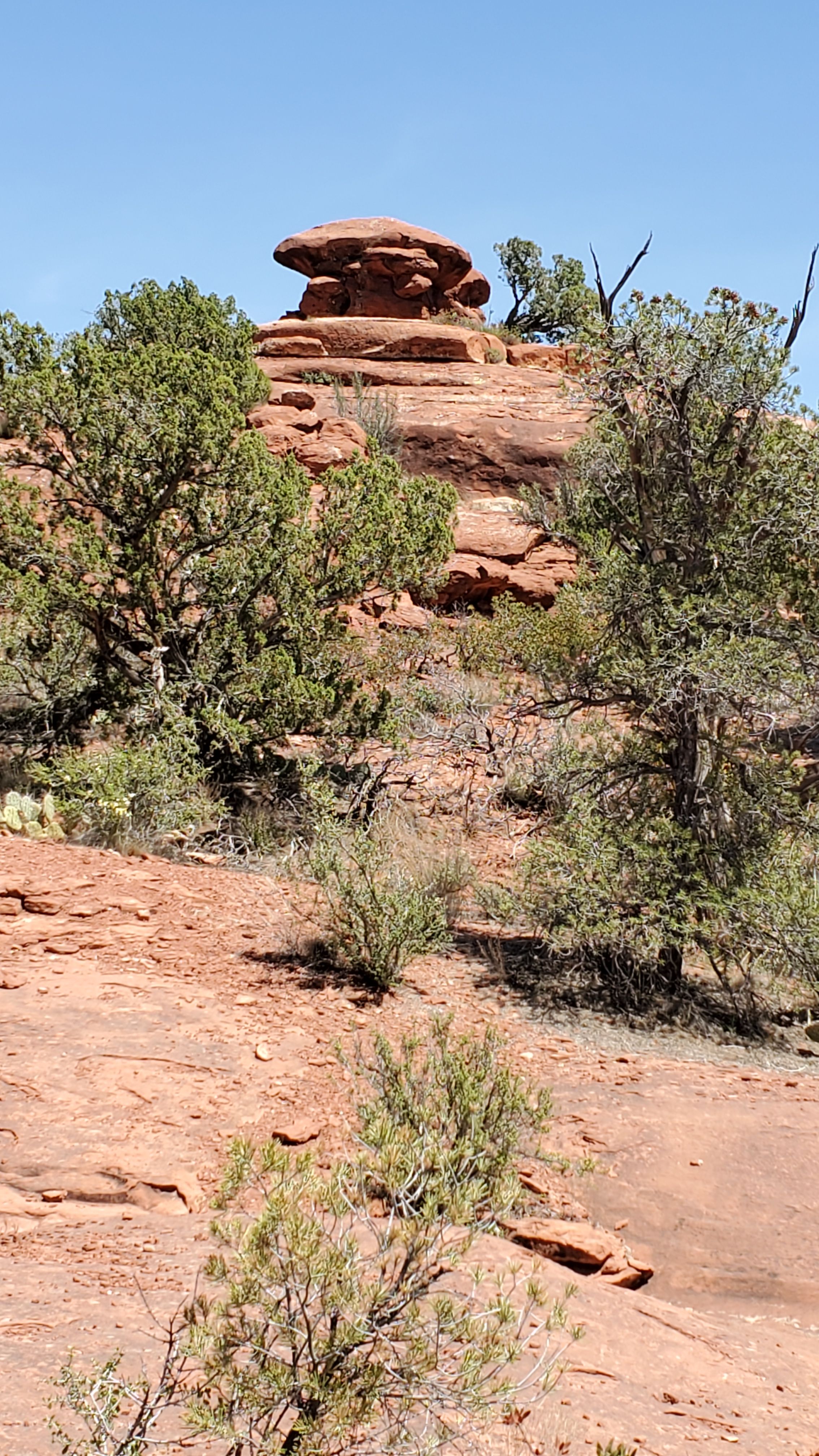 Photo courtesy of Sophia Sweeny The above photo is a picture of one of the many various sized knolls that the Westernerâs Dogie group ascended and descended on their April 20th hike. The hike encompassed a stunning five mile hike all along the Western ridge o

John Muir wrote, “Of all the paths you take in life make sure a few of them are dirt”.

Channeling John Muir, a group of eager Dogie Westerners put their trusty boots to the ground and found lots of red dirt, slots to ascend and descend, one very secluded amphitheater and as advertised many knolls. We had begun our hike just outside the Village of Oak Creek on the Transept Trail. The Transept Trail traverses the less congested western side of the Seven Warriors or Seven Sisters Ridge. Our hike would be concentrated along the Transept Trail.

We quickly began our hike and it led us through manzanita bushes and a maze of juniper and cypress trees and we came upon our first knoll. We scrambled up to the top and views of a nearby ranch came into view. Debate ensued as to whether the animals we spied in the corral were miniature horses or burros, alas no consensus was reached as we were too far away to really decide. This indecision, of course, had nothing whatsoever to do with our aging visual abilities.

We climbed down the first of what would become ten knolls and continued hiking on to five, or was it six more knolls? While ascending the various sized knolls and scrambling down them we tried mightily to keep count, and then tried to remember the count after the next knoll was climbed. This turned out to be rather difficult as there were double knolls in some areas and we were not sure if they counted as one or two. Controversy quickly began among the hikers as to just how many knolls we had been on.  This debate, as it turned out, would continue the entire hike.

In between the exasperating knoll counting we were delighted to find many beautiful wildflowers: desert paintbrush, firecracker penstemon, fleabane and biscuit root. While the wildflowers were not as abundant as past years due to our dryer than normal winter and spring, the flowers were just as stunning. Various cacti were in bloom as well.  The trail favorite was the claret colored hedgehog. The ocotillos were just beginning to open up. Two of our more adventurous hikers ate the green leaves off the Ocotillo. They are safe to eat evidently, and according to them taste “lemony”.  I did not partake so I have no opinion on that.

Continuing on through the woods and after climbing another slot we scrambled up four layers of a wash and were treated to a splendid semi-circular amphitheater. We sat down and enjoyed the cool shade of the rocks and had a snack. The discussion while resting was whether or not we could climb out of the amphitheater without rope assistance. Again, no consensus was reached. A pattern seemed to be developing.

After our break we continued on the Transept Trail and traversed the narrow path under the ridge for about a mile. We then took a sharp left turn out onto a rocky look out area where Cathedral Rock, House Mountain, Napoleons Tomb, Turkey Creek, and the Pyramid came into our view. After a short stop here and a cool drink we climbed down another slot and found our way to two or was it three more knolls. The debate still continues. The hike ended up at about four and half miles and somewhere between 700 and 1,000 feet of elevation change. We all had a wonderful hike, and thanked our leader Jim Kemper and co-leader Gini O’Brien. We were all pleased the weather cooperated by not climbing into the 80’s.

As I look back on the hike I am reminded of another quote by John Muir, “In every walk with nature one receives far more than he seeks”.  I received a hike up many knolls possibly ten, no actual consensus on that, and many fond memories shared with hiking friends…

If you are interested in joining the Sedona Westerners club, please visit the website at www.sedonawesterners.org/membership. Monthly meetings are held via Zoom at present until the Covid 19 restrictions are lifted.