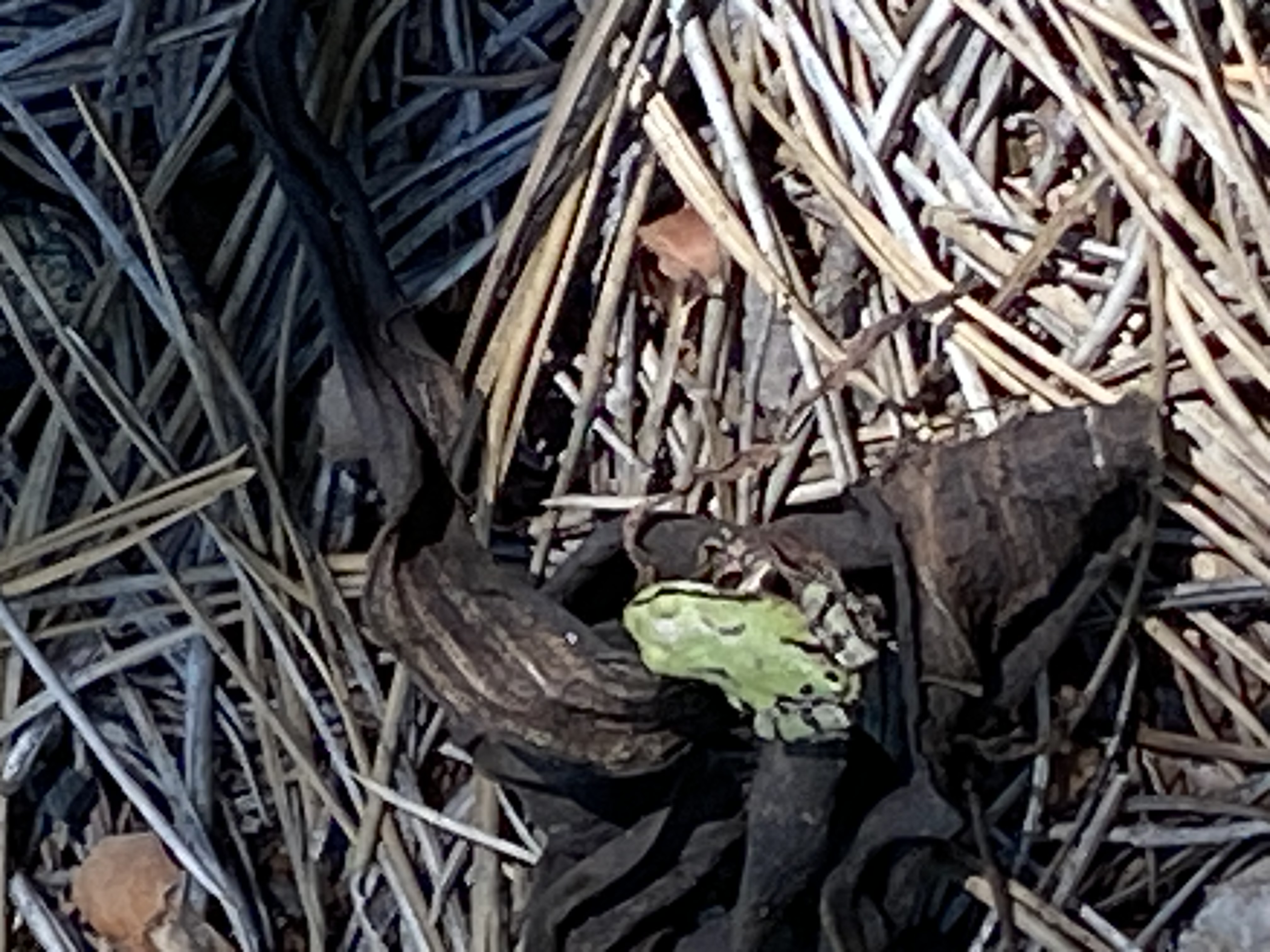 Scenery Photo Caption: Although the Amblers were enjoying the interesting formations in Kelly Canyon, this little green tree frog was spotted among some of the wooded features. A perfect example of why its important to look all around when you are on the trai

What a start to the new Sedona Westerners hiking season! After a great summer hiking in and around Flagstaff, and here in Sedona, the Amblers opened the new season with a modest but inspiring hike in Kelly Canyon. It was great to see new and old friends, and to meet new hikers who joined us for the first time.

The Amblers is the starter level for the club, hiking roughly 4-5 miles, with elevations ranging between 300-800 feet.  Despite considerable hiking experience, and hiking with other Westerners groups, many have remained with us and are devoted to the Amblers because of its easy companionship, good conversations and its members from all walks of life, which provide the grist for our chats.

We met at Posse Ground and carpooled up the switchbacks to our destination. Access to this canyon was from the west side off 89A rather than from the east off Rt. 17. After reading the rules and discussing safety, we divided into 2 groups and set off.  Our conversations included summer stories of travels, family, challenges, experiences and we were equipped with expertise in local flora and fauna, local geology, local botany, herpetology, marine and electrical engineering, education, psychology, medicine, pediatrics and all manner of trivia.

Our leaders for the day were Terri Petrescu and Linda Schirmer, and our tailgaters were Jon Petrescu and Tim Lowery, although it seemed like Linda’s group may had a collection of tailgaters, which I guess is okay as long as we return with the same number of hikers we left with.

Initially we encountered a rocky trail, but not far along a sandstone moonscape with some water remaining in small pools from the earlier monsoons came into view.  Unfortunately, we also found some graffiti scratched onto the sandstone by those intent on marking our landscape for their personal gratification. On our way back, this was expertly removed by knowledgeable and trained Friends of the Forest volunteers. We continued hiking through the mostly shaded paths traveled by many others before us.

About a mile in, the trail split and we were invited to take the path through a small opening in the rocks above. The ground was moist and a bit slippery, with a steep grade, but the walls of the tunnel served us well. Some of us climbed up the grade, entered a short, enclosed tunnel in the rock that had that dank scent of eons past, and we then emerged safely on the other side with a feeling of accomplishment and another Westerners experience behind us. I remember a board game we played as kids called “Chutes and Ladders”. This route was definitely a “chute” or maybe a “ladder” (ladders and chutes go both ways, of course) and were we trying to get to a destination more quickly, it was the way to go.  We met the rest of our group on the other side where the trail converged and we continued deeper into Kelly canyon.

I was told this had been a good season for mushrooms and had hoped to see and maybe collect some on this trip. However, the west side of Kelly was bereft of mushrooms save for one lone fungi which surprisingly poked its head out near the trail. We let it be.

On the other hand, our resident reptile and amphibian spotter found and photographed an unexpected Arizona Green Tree Frog, the state amphibian. This little fellow remained stationary long enough for his close up and then disappeared into the forest, presumably to join family or friends.  Recent rains have brought out some other amphibians and reptiles, but also mosquitos and a nice crop of poison ivy, which we studiously avoided. Late summer was in full bloom, mostly yellow.

The Ponderosa Pines in the canyon were impressive and very tall, with substantial girth. At several points along the trail, we could observe a strange sight—tree huggers assessing the sweet scent emerging from the crevices of the tree bark. Arms outstretched, barely making a third around the massive trunks, it was indeed a peculiar sight from a distance.  Some have experienced this before but the newbies, and even some of the “oldbies”, could not resist. So, what is it — vanilla, caramel, butterscotch? The scent is in the nose of the beholder, but wonderful, especially coming from these valley giants in the cool of the canyon floor.

About 2 miles along we decided to take our break and spread out among the fallen trees for a brief respite before returning to the parking area. We certainly could have gone farther, but our leader, Terri, decided that since this was the first hike of the season, it was getting a bit warm, and we had a number of new hikers to the group, we would head back. We arrived back to the trailhead about 2 hours later.

At the parking area, to memorialize this first hike of the season, the Amblers gathered together for a group photo and discussion of upcoming activities, including our next hike. In all, we had covered almost a bit more than 4 miles with about 500 feet of elevation gain. If this hike was a forecast of hikes to come, it bodes well for this hiking season.

If you are interested in the joining the Amblers, or any of the other hiking groups the Sedona Westerners club has to offer, please visit the website at www.sedonawesterners.org/membership.  It only takes about 5 minutes to sign up, and there are weekly hikes suitable for all abilities.  Monthly meetings are still held via Zoom at present until the Covid 19 restrictions are lifted.