The Drovers Hit the Canyonsâ¦and Fix Some Boots! 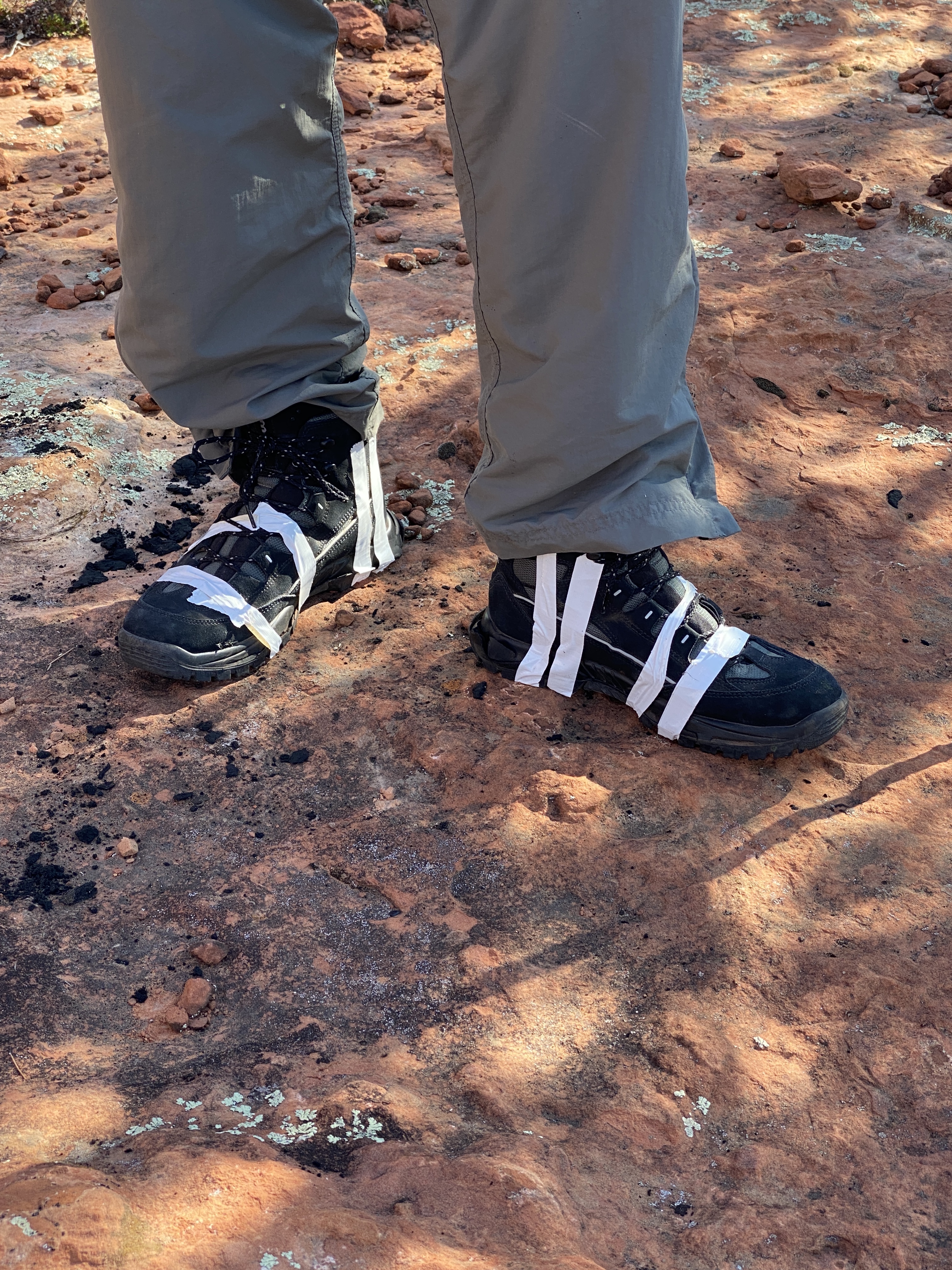 Even boots can have their bad days on the trail. Although not very fashionable, this ingenious repair with duct tape allowed the hiker to complete the adventure.

Sunday morning, October 3rd, found the Drovers checking in at the Posse Grounds parking lot just as the sun was coming up over Munds Mountain.  Given the craziness of parking along Dry Creek and Boynton Pass roads, we decided to car pool that day to minimize the number of cars needing to be parked at the trailhead.  We had several stragglers given the meet-up time had changed the day before, but the group was finally all together.

We signed in and remarked on the wonderful morning, and then Linda Shook, the Drover Boss, proceeded to read the Westerner hiking rules, including updated COVID-19 guidance. Additionally, in striving to maintain the normally supportive and welcoming atmosphere of our outings, the Westerner Board has added another etiquette request to refrain from talking about politics or using abusive language.  All agreed that most of the time the latter follows the former so you can probably handle both points at the same time. After a quick round of introductions, we hopped in our carpools and headed out.

For our adventure this morning, Dave Vanderwater and Gay Gibson were to be our leaders and the always dependable Ray Laporte was there as tailgater to make sure we all arrived back safely.

Parking proved easier to find than expected, so after a quick pause for a few more hikers we set off up the trail.  After a short while it was time for a quick “clothing adjustment”, as the sun was now higher in the sky and the chill of the morning was fading quickly.

The views of Fay and Boynton canyons never get old, and this morning was no different.  The shadows were changing constantly as the sun made its moves, and new things were seen around every corner.  The veritable palette of browns, whites, and greens against the deep blue sky proved to be mesmerizing.  Puffy white clouds only added to the beauty.

Westerner hikers can be quite talkative, and there is never a loss of interesting conversation topics.  Somehow the discussion focus shifted to boots, personal preferences, etc.  One of our colleagues, Bill, had on what seemed to be a pair of brand-new boots.  Quickly followed was a story of how he obtained them at an estate sale for an extremely bargain basement price of $6…and that they were his exact size.  Most everyone had some level of envy for his great deal.  This envy, however, would be short lived.

About 10 minutes later, close to our snack stop, the soles of both of his boots starting flopping around. It appeared that the glue bonding the soles had disintegrated, and hiking for him was about to get pretty tough.  This event quickly turned into a “teaching moment” for the group, and how to make repairs on the trail when you are in the middle of nowhere.

Ray Laporte came to rescue, with a small roll of duct tape in his pack.  After about five minutes, and a lot more ingenuity, both boots were temporarily repaired as shown in this photo and Bill was able to finish the rest of the hike with us.  It may not look too fashionable, but it is a great example of being prepared with simple items on the trail.  Bill even joked at one point that he thought his traction was even better with the tape repair.  Yet another use for duct tape other than actually sealing duct work! I also understand there are now rolls of tape in many more Drover daypacks.

The group hiked onward, always on the lookout for interesting formations, large crystal inclusions in the slickrock, or signs of previous residents in the canyons.  We were rewarded with views of possible living sites from a distance.  After another hour or so we took a break for brunch on the rocks with more outstanding vistas of Boynton Canyon.

This was our outermost point, so we turned around and headed back the way we came.  Some people don’t like out and back trips, but if you keep your eyes open there are different things to see and different perspectives from every direction.  Either way, the Red Rocks never fail to impress or amaze.

We arrived back at the parking area to find many more cars than before.  Everyone agreed it was a tremendous hike and a beautiful and rewarding way to spend a Sunday morning.  As we hopped back in our cars and left, the spots were quickly filled by other visitors about to enjoy the trails.