A Cold Hike for Ice Cream 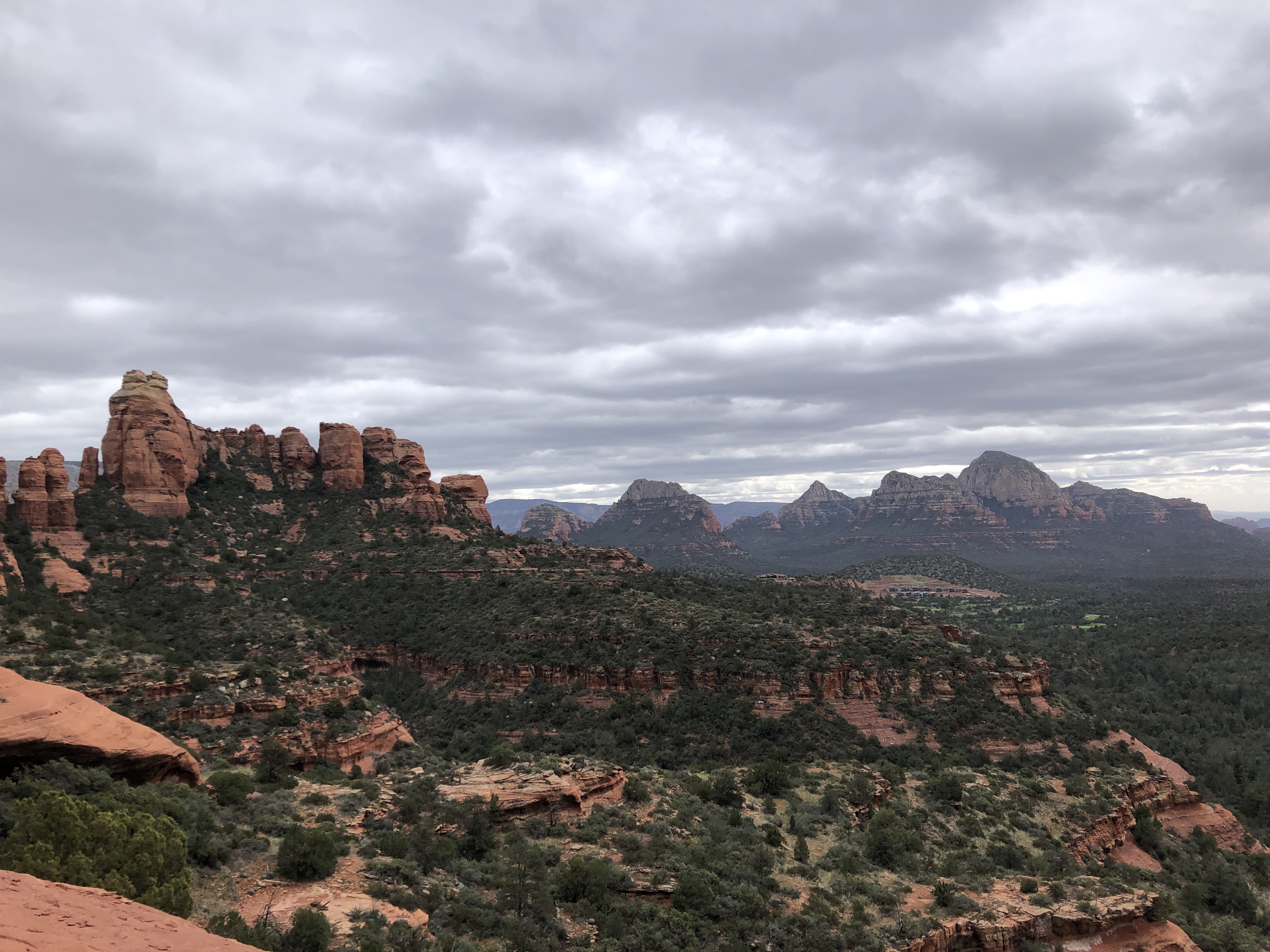 We were rewarded with a great view of Thunder Mountain from Ice Cream Cone. The skies even made it look like a chilly fall day.

Here it was, October 12th but feeling more like January 12th. An early cold front had passed through the night before bringing with it some light rain (snow in the hills) and much colder temperatures. My wife and I could see the white atop Wilson Mountain on our way to the Posse Grounds. The Sedona Westerners’ Dogies hiking group was gathering there for the day’s scheduled hike: a rock formation known as the Ice Cream Cone.

Despite the cold, we had a larger than expected turnout. Just goes to show that the Dogies are a hardy lot. After the reading of the rules, our leaders, Jim Kemper and John Losee, described the hike and gave us directions to the Long Canyon trailhead. “Travel down Long Canyon Road about ½ mile and park by the mud puddle.” Yes, the mud puddle is well known to the Westerners, usually present throughout our hiking season. It has become such a predominant landmark that even during the drought months we would still say “park by the mud puddle or where it used to be.”

Once everyone made it to the trailhead, we divided into two groups and set out on the Long Canyon trail. This is a relatively flat trail that takes you past the Seven Canyons golf resort, through meadows, across some dry creek beds, and into the Long Canyon wilderness area forested by Cypress and Ponderosa Pine. The trail is roughly 4 miles one-way if taken to its end. We weren’t going that far. About half way in, you can see our objective, the Ice Cream Cone, so named because that’s what it looks like. It has a red sandstone base (the cone) with a white sandstone (ice cream) cap. Sorry, no sprinkles.

While the Long Canyon trail is fairly easy, the climb to the Ice Cream Cone is anything but. There are boulders to climb over, steep slick rock sections to traverse, and rock scrambles to climb. Though difficult, it is very pretty. There’s one slick rock overhang that weeps water year-round aiding the unusual vegetation that grows there. Towards the top, the trail enters a shady section in which we found some snow. We ended our ascent at the high point between two spires, one of which was the Ice Cream Cone.

Having met our objective, it was time to break for snack/lunch. Normally this is a great spot to take a leisurely break. However, given the windchill and the fact that everyone seemed to be under dressed, we were up and ready to go after only ten minutes. So, down the hill we went retracing the route we had taken up. Once back into the canyon it was much warmer as we were protected from the wind by the trees. The trek back on the Long Canyon trail took us through the same forests and meadows. Yet there was one surprise towards the very end. A small herd of Mule Deer was grazing just off the trail to our left about a quarter mile before the trailhead. They were very much undisturbed by our presence. So much so that we would have, no doubt, missed them if other hikers hadn’t already gathered to take pictures.

Leaving the Mule Deer behind us, it was only a matter of minutes until we were back to our cars. Thus ended our cold hike for ice cream.