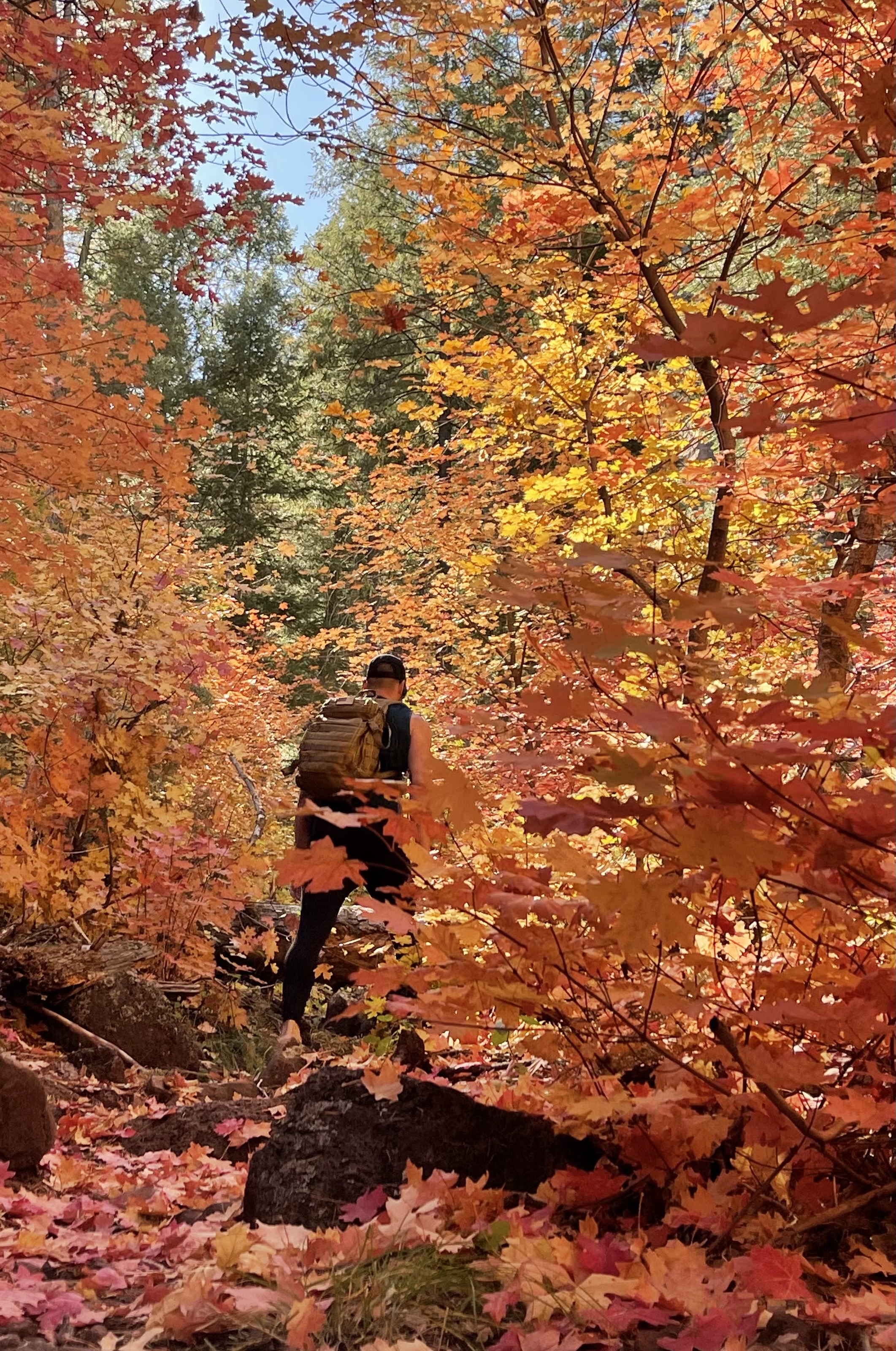 The end of October brought beautiful days to Oak Creek Canyon. This photo shows the explosion of color in the leaves as the sun warmed the morning sky.

Wilson Mountain is complicated. Enigmatic. Standing high above Sedona, she stares down from an elevation of 7000 feet, projecting her constantly shifting disposition upon the town and her subjects. She enchants us and confounds us. Claret cups on cacti. A falling shard of pink Apache Limestone, stricken from the geologic record above. Monsoon storms like hell from on high. We never know what we’re going to get. But when we embrace these sudden shifts of temperament, and revel in these diverse changes, we discover adventure and the true generosity of Wilson Mountain.

Wondering what we would get today, the Mustang faction of the Sedona Westerners launched our October 28th hike from the north side of Wilson Mountain. Departing from the Encinoso Trailhead, we barely touched upon the orange, Schnebly Hill formation before digging our lugs into the steep, buttery band of Coconino Sandstone above.

Mustang hiker Chris Sheppard explained to us that millions of years ago, this particular section of the mountain suffered a catastrophic fault, causing the east side to slump downward. Thus, the Coconino layer on which we were standing, as well as its top rocks of Toroweap and Kaibab Limestone, slid down the side of the mountain to create what we call the First Bench.

The first hundred feet of elevation gain lead us through stands of ponderosa pine, oak, and maple: nothing special. Al Gore, our hike leader, paused here and there to snap a photo or two: nothing unusual. Up a steep boulder, around a switchback.... and then a sudden shift. In an instant the forest exploded into an autumnal tempest! Maple trees blazed in shades of russet, scarlet, and magenta. Tall, skinny oak trees burned in gold and ochre. Scraggly sumac branches wore leaves of orange and yellow. Even the ill-reputed poison ivy plant shone in a knee level canopy of gold.

The low angle of the morning sun illuminated each leaf, bathing the forest in a warm crimson light. The sloping canopy created a fairyland of little rooms, windows, and arches, each painted in its own glowing color scheme. We stood in awe, unable to believe the profusion before us. Wilson, with her thick layers of billion-year old rocks, had transformed herself into something so delicate, so ethereal, that geologic time became a single, weightless moment.

We aimed our cameras again and again, trying in vain to capture the ethereal quality of Wilson in her mantle of light and color. Somewhat dazed at the spectacle, we staggered on, passing through higher elevation forest and meadowland. As we topped out at First Bench, the trail meandered through alligator juniper, prickly pear, and wildflowers. Passing an old rancher’s tank, we spotted a doe, browsing amongst the fragrant mariola shrubs. We paused here to enjoy the wildlife and a sip of water before heading to the top.

Wilson Mountain, at her highest point, is a landscape that resembles Flagstaff, not Sedona. There is no evidence of the orange and pink sandstones which make up the majority of Sedona rocks. As one of the final outposts of the Colorado Plateau, Wilson is crowned with bone shaped Kaibab top rocks, and forested with lightning scarred ponderosa pine. This small sample of the Plateau, strewn with chunks of black lava, leveled out before us as we topped the final layer and traversed to our lunch destination at the Sedona Overlook. Taking in the mesmerizing views, we reclined on the warm rim rocks, dozing like a family of fat, satiated bears, drunk with honeyed light and the colors of the day.

The magic and complexity of Wilson Mountain might be attributed to, as landscapes are, the change of the seasons.  But that is only part of the story.  Billions of years spent in the comings and goings of seas and deserts, and a gossamer overlay of atmosphere and axial tilt.  And, so, her ancient geological column of wisdom, having seen it all, has earned her the right to be enigmatic.

Thus, we Mustangs gathered up our picnic in the slanting afternoon sun and prepared to descend the 2200 feet back down to the trailhead. As we scampered downhill, content with our day, our thoughts were on the wildlife surrounding us, unseen, but awaiting dusk and their own dinners.

At the one mile mark we searched, to no avail, for the original scene of the morning’s riotous color.  Gone were the fairy rooms, the gold, the profusion of warmth and glow.  The leaves were again as opaque as rocks on the trail.  Poison Ivy was poison once again. Here was our Wilson Mountain, in the low, flat light of a changed mind.  We had been graced with a single, weightless moment of her generosity.