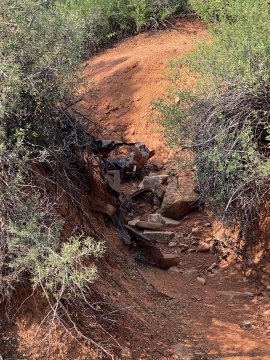 The washes around Sedona contain many unique items. It would be great to know the story of this old vehicle.

You are probably wondering what unicycles, car bumpers, and chandeliers have in common?  The answer is they are all things Sedona Westerners have seen on their hikes.

After a recent outing on trails in the Chicken Point area, where within 10 minutes we saw a mountain biker actually riding the white line (doing a wheelie at one point, no less) and old car parts wrapped around a tree in the middle of nowhere, I thought it might be interesting to poll the Westerners to see what the most interesting or unique things they had seen or encountered on the trails.  I hit send on the note, not expecting much.  Boy was I wrong. Within a few hours my email box was filled with replies.  So much so, that I got enough for two weeks of articles.

This week we will delve into naturally occurring things and a category just called “Parts”.  Next week will be “People.”  There were so many of those that they warranted their own column.

We have unfortunately become numb to many of the normal little things that get left behind.  This includes orange peels, water bottles, water bottle caps, protein and nut bar wrappers, those elastic hair bands, sunglasses, and the used Kleenex and wet wipes.  It’s amazing, and sad, what gets left behind.

Scanning the trail, however, there is a treasure trove of naturally occurring things.  Take fault lines, for example.  On the top of Submarine Rock there is a fault line that is oriented approximately northwest to southeast.  In the middle of it is a stained white pool that has been offset about 6 inches—it looks just like a circle that has been cut in half and shifted side to side.  It must have taken a long, long time for that to happen.

Ernie Pratt is a geologist, and he has seen a vast catalog of fossils and similar formations.  These include Anapsid tracks usually in the Upper Schnebly formation, Thalassinoid burrows primarily in limestone rocks that have tumbled down the hills from the Kaibab formation, coral, fossilized shell debris, and many minerals.  Copper stained rocks in old campsites, calcite in geodes, pyramids, and other tubular rocks are among the list, as are vortex balls. You will have to ask him what a vortex ball is.  There is also a plethora of volcano vents, feeder dikes, and numerous types of lava. Folks have also seen Triops in a wash near the Polygons.  It sounds like an Intro to Geology course…all in our backyard.

Critters and slithering creatures are all around us.   We had many reports of lizards, beautiful Bucks with 10-12 points, and tons of snakes. The most reported, however, is 5 rattlesnakes in one hike in Sycamore Canyon.  I will not be hiking with that person.

Then there is the long list of people made things.  Numerous sightings are of car parts seemingly miles from any road.  Tom Makielski and others tell of a hike on Black Mountain, near the rim of Sycamore Canyon, where they found a beautiful chrome car bumper up in a tree.  This was 3 miles from any road.

Nearer to Sedona, there are old car and truck parts in numerous places, not to mention old cans and glassware.  Some of these areas include Girder Trailhead by the old Sedona town dump and some areas near the Chapel trails in Village of Oak creek.  It seems as if there are antiquities laws that prevent the removal of any of these items. You can still read some of the can contents through the rusted painted on labels.

Wilson Trail near Midgley Bridge.  It was gone several weeks later, but it begs the question how it got up there.  Or better yet, how did they get it down?

Sandi Heysinger, on a recent non-Westerner hike up to Keyhole, found an almost new Garmin handheld device near the back of the cave.  We hope that person got back home okay.

Linda Schermer may get the award for most observations.  Her 22 years of hiking with Westerners has produced a veritable backpack full of interesting things.  This includes cars in Carroll Canyon, off Jim Thompson, and near Chapel Trail as well as the carcass of the Vultee Arch’s namesake Vultee airplane crash. There were even old metal bedsprings and an actual kitchen sink in drainage near the Bandit Trail.

On one hike she visited with Forest Service personnel hauling a sparkly chandelier and other similar items out of an illegal campsite on Huckaby Trail.  Who says campers can’t be elegant and refined?

We spend most of our time on the trails watching for rocks, ruts, roots, and slippery surfaces.  After reading this article, however, it may just be a good idea to slow down and look around every so often.  The Red Rocks are indeed beautiful, but there is whole world of other stuff lurking on the trails for us to see.

Next week we will focus on “People” related things.  I guarantee it will be entertaining, amusing, and filled with “You just can’t make this stuff up” moments.

Oh…and you will just have to wait to find out how unicycles fit into this equation.