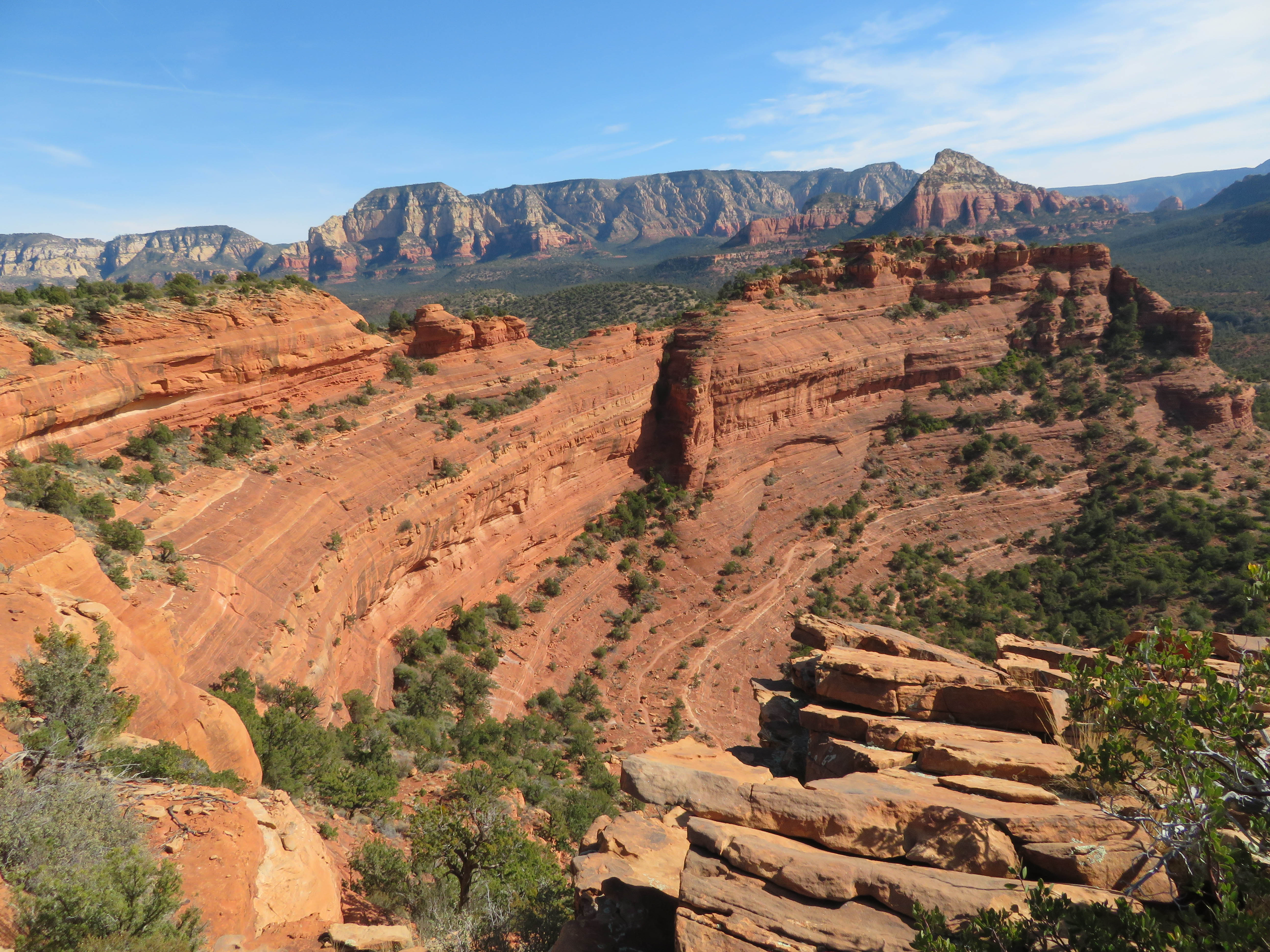 Many Red Rock Trails can be combined for interesting loop hikes, often with very different views depending upon your direction of travel. This is Mescal Mountain on a clear fall day.

Everyone seems to like a loop trail. Each step covers new ground, and you can do it in the other direction for a completely new experience. On a recent Sunday morning that was perfect for hiking, the Drovers group of the Sedona Westerners set off on a loop hike billed as “Mescal Circumnavigation”, with Ben Shor as chief navigator and Drover Boss Ray LaPorte in the stern.

Mescal Mountain is located in a wedge formed by Boynton Pass and Long Canyon Roads.  In Google Earth, it appears as a mesa with three distinct arms.  Historically, the east side and north side of this mesa were bounded by ranch tracks that became parts of the Long Canyon and Deadman’s Pass trails respectively.  The trail along the west-facing  side was created and worn in by mountain bikers and hikers. At a certain point about ten years ago, the Forest Service saw that it was good and incorporated that side into the trail system, thus creating a mighty fine loop trail!

Our group started off at the Long Canyon Trailhead. The parking is informal but there is a map kiosk where the trail starts.   We chose to go counterclockwise around the loop, so we started on the Long Canyon trail, but if you go to left at the kiosk you will hit the Mescal trail after a short uphill.

The early morning temperatures were brisk and delightful.  Bikers and hikers were with us on all parts of the trail.  The bikers are frequently doing the whole loop, but many of the hikers nowadays are going to the so-called Birthing Cave, a vaguely gynecological feature on the east-facing side of Mescal Mountain.

Our route bypassed the Birthing Cave and soon reached a point with  panoramic views from Bear Mountain on the left, past the openings of Boynton Canyon and Long Canyon and eastward to Wilson Mountain and beyond. For the next little while, we were treated to a relatively flat amble, taking in these great views along the way.  Before heading down, the leaders declared a snack break at a spot with plenty of flat-rock seating, but some chose to hunker down out of the wind, which may have been with us all along but only became something to reckon with once we stopped.

After break, our route took us along the Deadman’s Pass Trail, which is fairly wide at this point from heavy use. By and by, we met the Mescal Trail coming in from the left, and thus began some moderate switchbacking to reach the start of a broad and magnificent shelf which would take us most of the way home.  For many this shelf is the main event on the hike.  To the left is Mescal Mountain itself, with stretches of near-vertical redrock walls. To the right, there is a moderate slope and big views toward Doe Mountain, The Cockscomb, Chimney Rock and Thunder Mountain. You will pass two side trails, Canyon of Fools and Yucca, which provide alternate access to the Mescal loop from Boynton Pass Road at the cost (or benefit!) of some extra hiking.

At one point on this stretch of the Mescal Trail, hikers are asked to choose between “Difficult” and “Extreme” routes.  Do not be alarmed, the signs are for the mountain bikers, who have different things to worry about.  For hikers it’s all part of another good day in the red rocks.

For the record, Mescal Circumnavigation is a 5 mile hike with about 500 feet of climbing.  It is rated “moderate”.