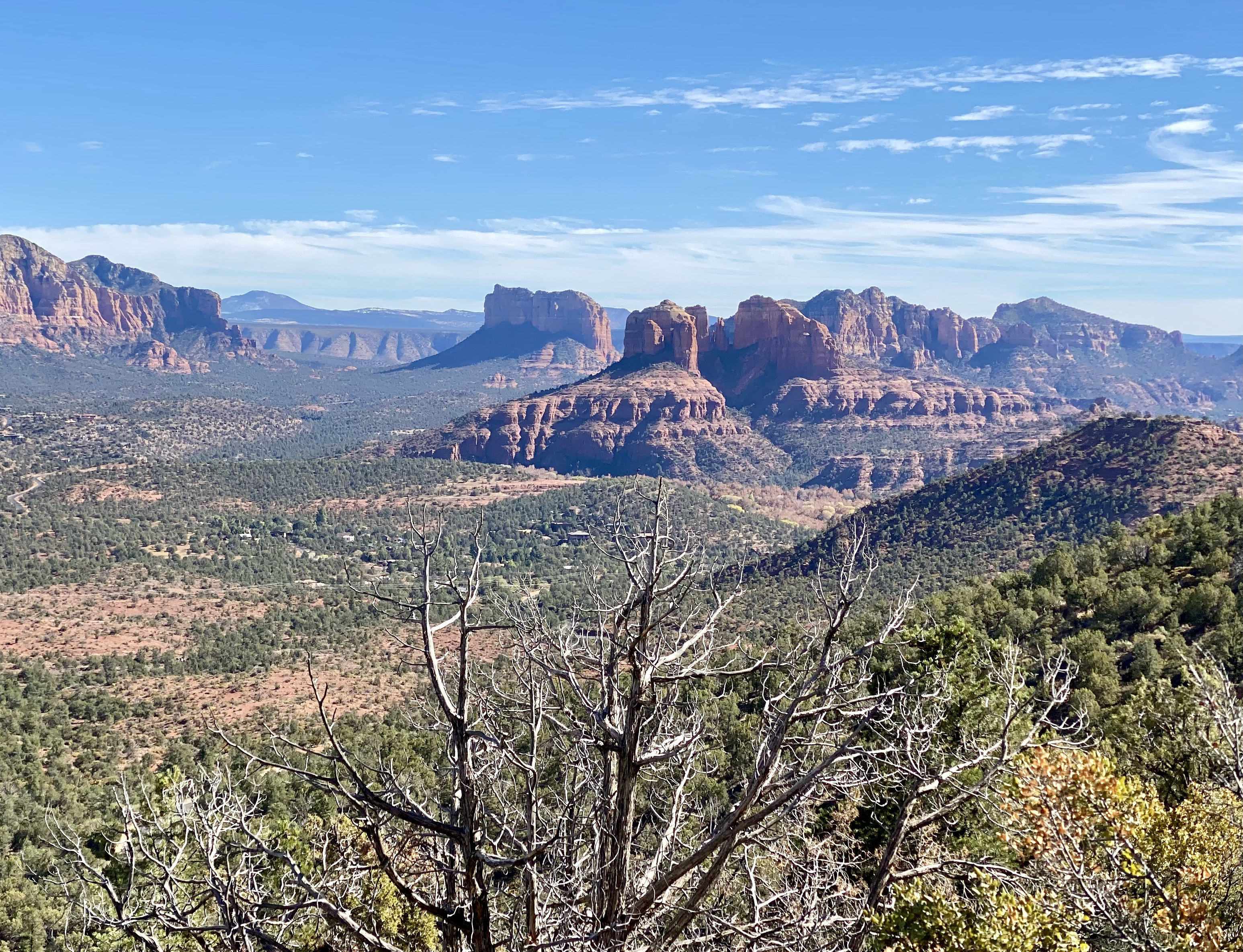 Although close by and seldom used, the Scheurman trail provides unparalleled views of the angular beauty of many of Sedonaâs iconic formations.

The Westerner Mustangs began the outjng with a discussion of hiking safety while practicing COVID etiquette.  We started this hike from the Cultural Park, not wanting to crowd the small parking lot at the Scheurman Mountain Trailhead. Our group was doubly blessed this day to be led by geologist Ernie Pratt and co-led by his wife Lynn, a geophysicist.  Although they sometimes do not technically agree, there is an upside. Their different-viewpoint geological banter provides for a more extensive view of our red rock world.

The Scheurman Trail is one of the best trails in the area given its close proximity, general lack of hikers, and easy access with spectacular 3600 views from a number of vistas.   At the first stop the Mustangs took in the full panoramic northerly view over West Sedona backstopped by Thunder Mountain, we scanned Mingus Mountain in the west to Wilson Mountain in the east.

We had climbed with the airport at our back, turning to watch numerous helicopters and planes fly over and land at the airport.  We were above it all.  Scheurman Mountain is named after Heinrich and Dorette, early settlers along Oak Creek.  Notably, in addition to living off the land, they grew apples and peaches while maintaining a vineyard. Wine was made catering to the sophisticated tastes of the miners in Jerome.

On the mountain top our path took west through knee high grasses and open lands.  On the scout we had spotted and marveled at a pair of the large Antelope Jackrabbits as they bounded through this high grass.

Coming up on another vista we could now look south, a view dominated by House Mountain, which is Sedona’s very own volcano.  This 15 Ma Shield volcano is made of numerous lava flows consisting of different chemistries. They are part of the Hickey Formation which also tops Mingus Mountain. As we looked across Oak Creek it was hard to believe that this volcano was once covered by a lake that filled the Verde Valley.

At last we hiked to the polygons and had an extended break while the geology of these unique features was explained.  Polygons are result of regional drying of massive nearshore red sands causing polygonal cracking and then a filling of the cracks by white windblown sands off dunes prevalent to the north and east.

Above us along the cliffs are well exposed columnar basalts.  It is a special place to stop.  Before moving on we tested a natural social distancing phenomena, with each of us standing on every other polygon. We ended up almost exactly 6 feet apart!

As we hiked we learned about joints, concretions, why the rocks are red or white and how the Pyramid formed topped by the Fort Apache Formation.   We eventually ended up at the Scheurman Mountain Vista.  With one view you can see Sedona icons:  A Pyramid, a Cathedral and a Courthouse.

Our leader mercifully ended his geological conflab with a more detailed geological history of Cathedral.  This mountain was once encased by volcanic flows and was much higher than it is today.  Although learning some geology was a forced consequence of this hike, happily there was no exam.

As we left it was noted that a direct hike from the trailhead to Scheurman vista would not be overly difficult and it would be an excellent place to watch the sunset over our Sedona rocks.  The hike ended by going downhill and on a sidewalk, which are good things.  It was a good day to keep moving.