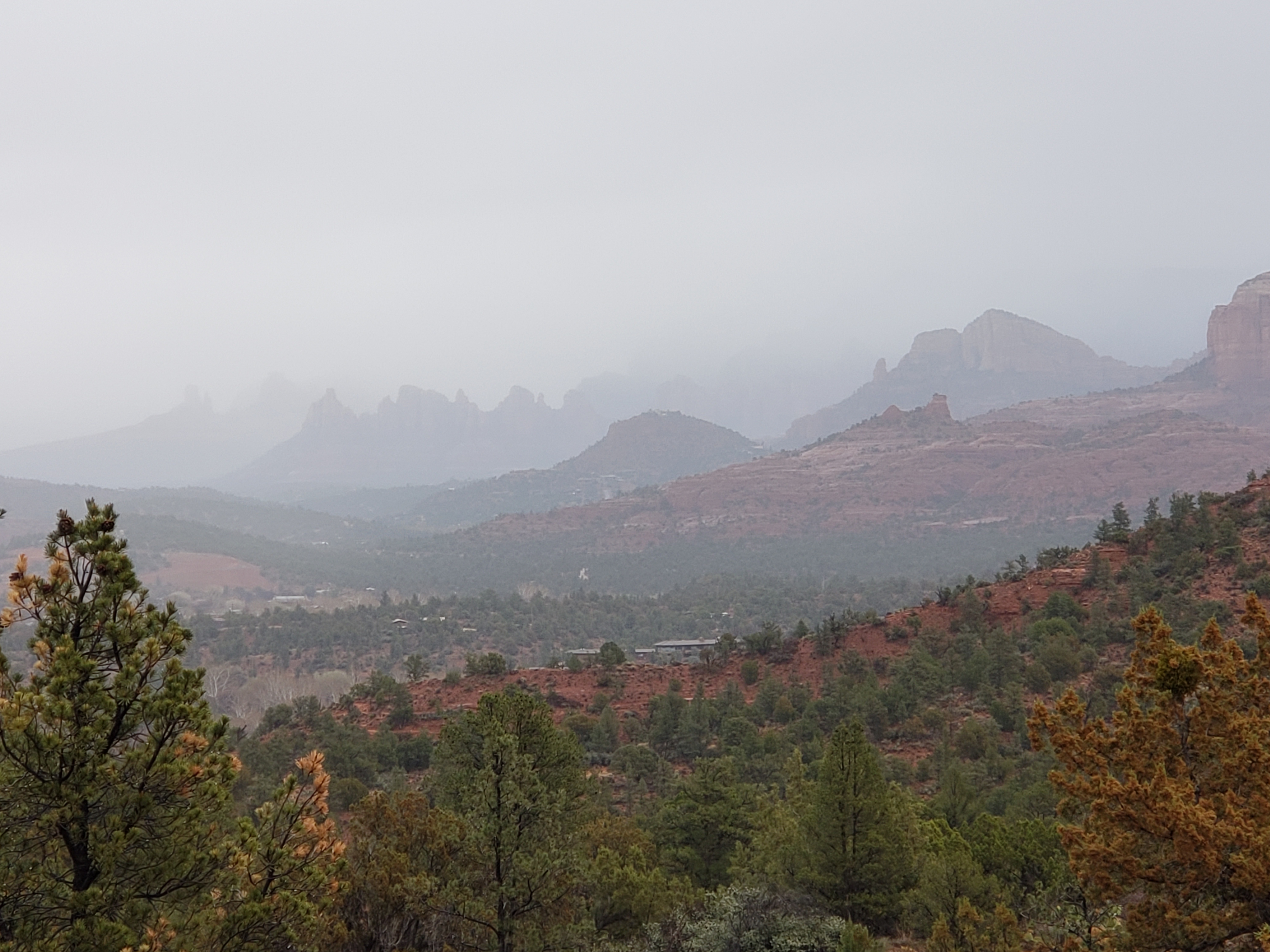 On the way to visit the Mayan Man the Westerner encountered this unlikely view of our iconic landscapes. Low clouds and drizzle instead of the normally brilliant blue vistas.

It was a fine gray morning, unusual weather for Sedona.  No blue in the sky.  The weather forecast said 40 percent chance of showers for the morning.  The radar showed a big green blob over Prescott and coming our way.  The temperature was nice, no chance of it turning to snow.

A flurry of text messages went out.  Should we hold the hike or cancel?  The lead and co-lead having lived in Washington state, said go.  The weather there wouldn’t have been a consideration.  For our destination in Turkey Creek there wasn’t an issue with hiking on wet slick rock, and no ledges to consider, so hiking with a little rain wouldn’t be a safety issue.  We were on.  As the co-lead, I figured we would have a handful of hikers ready to get out on this January morning.

What a surprise we found enough to have two groups of hikers ready to go on this gray morning.  When we met everyone agreed that we might get a little drizzle, maybe some rain, but we were ready for that.  So off we went, glad that we hadn’t cancelled.

We quickly broke up and headed down the trail.  Talk centered on how it smelled like rain as we hiked the first mile.  We were hiking into a very gray patch of sky.  Soon we could see that the hills ahead of us were disappearing into light rain.  We still carried on.  At the first “clothing adjustment” a few people got out their rain gear, just to be prepared.

The drizzle soon came our way.  Just a steady drizzle, then a light rain.  Nothing drenching.  Enough to settle the red rock dust that is always on the trails.  More jackets went on during our next break.  A few people were still holdouts.  Everyone was quite happy to be out hiking in the drizzle, such a change from our normal blue-sky hikes.  It’s January, most have overindulged during the holiday season and are ready to be more active again.  A few commented that they wouldn’t have started the hike if it was drizzling when they left their house, but were glad they came.

Our destination for the hike was a rock face that has been nicknamed “Mayan Man”.  There is another in the Village nicknamed “Mayan Maiden”.  I think “Mayan Man” looks more like the Easter Island figures, but I wasn’t asked.  Lots of the rocks around Sedona have names, a few are double named.  Like Thunder Mountain is also called Greyback Mountain and Capitol Butte.  Apparently, there are a few Napoleon’s Tombs.  We stood around long enough for a few people to get pictures, everyone was wet and decided to not have our standard first snack break and continue on.  The views back to Sedona were more like you expect to see on the foggy coast, outlines of the hills visible, but not the detail we are so used to seeing.

Then onward we went.  We started getting into volcanic rock.  Talk turned to the volcano that had just erupted in Tonga.  The scientific folks started talking about the pressure wave that made it around the world just after the eruption.  Even home sensors in Sedona picked it up.  Many visitors to Sedona never know about the volcanic history of the area.  We were hiking just around House Mountain, one of our shield volcanoes.  Traces of the basalt littered the red rock we were hiking on.

As we started the last part of the hike the rain/drizzle was gone.  Jackets came off.  People were happy to have come on the hike.  There wasn’t enough rain for there to be any mud, just enough to settle the dust.  We noted spring is on its way, seems a bit early.  The cottonwood tree by the old “tank” has the first sign of color changing as buds are starting to swell.  We noted lots of green grass under the mesquite trees.  I told the group that the mesquite trees add nitrogen to the soil so are good for the desert.  Early settlers apparently ripped many of them out not understanding this relationship.

A break for lunch, and it was time to head back, happy to have been outside on this fine drizzly morning.