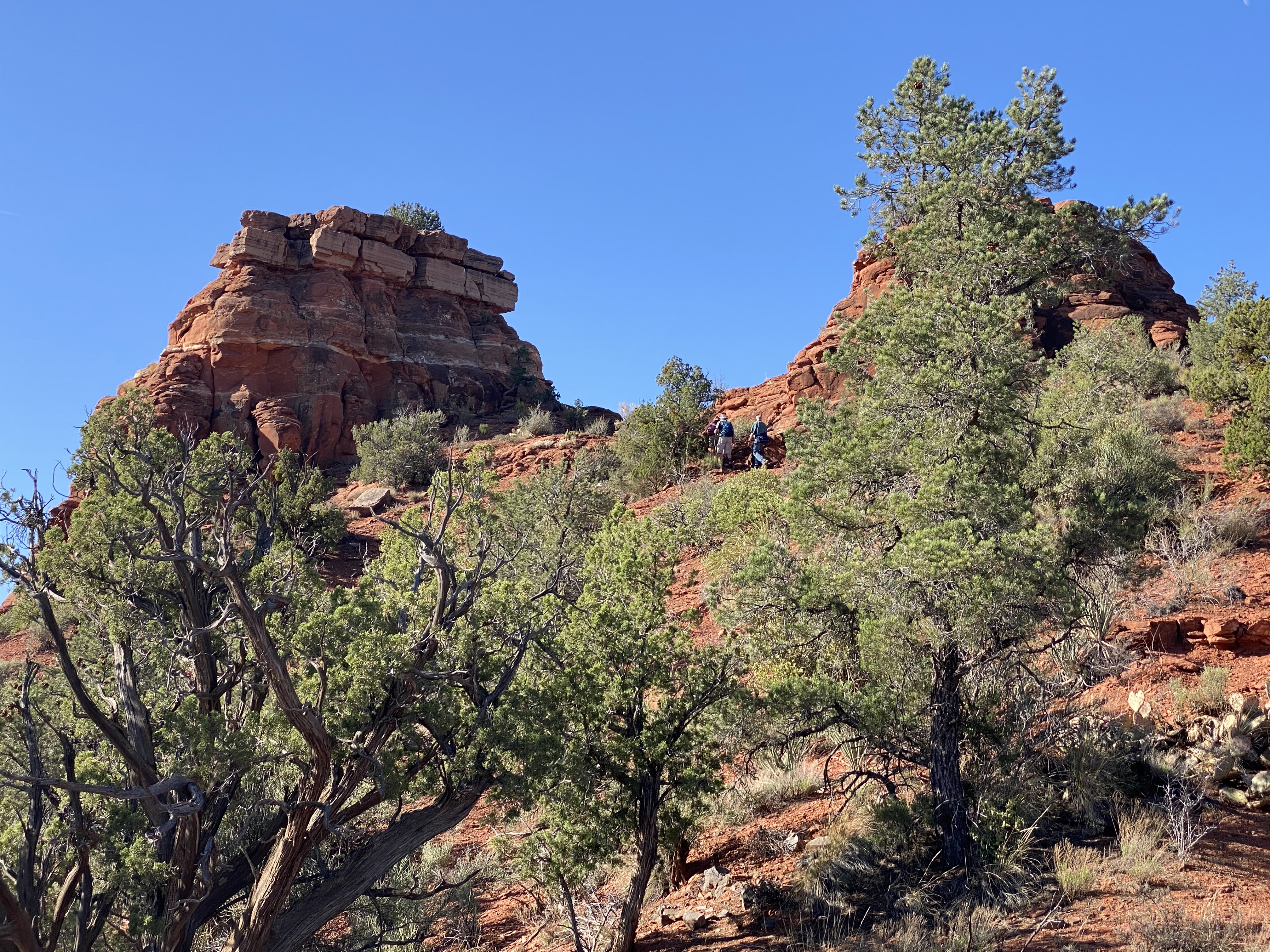 This Napoleonâs Tomb, not in Paris, is yet another example of unique local Red Rock features getting interesting nicknames.

The Sedona Westerners had a fun hike on Sunday, Jan 23rd, when the Drovers ventured out on their third hike of the new year. The Drovers call this hike, Napoleon’s Tomb - Baldwin Loop. No, not the real Napoleon’s tomb, just a view of a rock formation that looks to some like Napoleon’s tomb, sort of.

Hike leaders Annette and Guenther Pollak put together this wonderful hike that took us to the Village of Oak Creek. We gathered at the Baldwin Trailhead at the end of Verde Valley School Road on a day with clear skies and cool temperatures. The day would warm up quickly. We made our way across the road to the Baldwin Trail. The Baldwin Trail circles a large red rock formation that has interesting visual features, then later parallels Oak Creek near Red Rock Crossing.

Two rock pinnacles are the most prominent features to one side of the trail. One has a boxy limestone cap which earns it the nickname, Napoleon’s Tomb, among some of the Westerners. I say some as other Westerners call a different rock formation in the Turkey Creek area by the same name. It’s enough to confuse even Bonaparte! But that’s not important right now.

Next to the Tomb is another pinnacle that forms a saddle between the two rock features. Looking up at this unique formation from Baldwin Trail is striking enough, but seeing the color contrast between the red rocks and the clear blue sky is simply breath taking. The crisp visual boundary between the rocks and sky seems to deepen the colors of both. As we made our way around these formations on a bright sunny day, the dance of light and shadows formed interesting and ever-changing patterns on the red rocks. It’s hard to keep your eyes on the trail!

On the east side of the Tomb, Baldwin Trail comes to an intersection which is the end point of Hiline Trail. Hiline Trail joins in from the south, bringing in hikers and mountain bikers from the Transept area. Hikers on Hiline Trail generally start out from the Yavapai Vista Trailhead. This intersection is in a rugged area between the Transept rock formations and Cathedral Rock.

Mountain bikers enjoy the challenges of this area. Today was no exception, as several mountain bikers were making their way through. In this area we could see ocotillos perched along the rock ledges with a southern exposure. And who could miss the ever-present prickly pears! They are pretty from a distance. Don’t ask me how I know.

One new Westerner pointed out the amazing variations along this relatively short hike. The views, sights, and sounds changed constantly. Cathedral Rock, as always, was visually stunning. We could see early morning hikers who had already climbed up to the spires from Cathedral Rock Trail on the other side. We know well the views they were enjoying! Next, the scene of rugged rocks and ledges near the intersection of Baldwin and Hiline gave way to junipers and Arizona cypress trees. The trees became more dense as the trail descended to an area with a dry wash that appears to have been not so dry during the recent rains. Then suddenly, another intersection!

At this intersection, and to the right, was Templeton Trail. To the left, Baldwin Trail continued on. On other hikes, we take Templeton Trail along scenic Oak Creek and make our way to Cathedral Rock, but today, we turned left to stay on Baldwin and head for Red Rock Crossing. This part of the Oak Creek is what attracted some of us to Sedona in the first place as many of the iconic photos of Cathedral Rock are taken from this area. At the intersection, the forested trail gave way to a sandy trail in a wide grassy area. In the winter, the dry grass has a beauty all its own, but we were reminded that in the spring, it will soon be green and filled with wild flowers. That would be a great time for another visit!

The sounds along Oak Creek had changed too. The sound of the rushing water and the more plentiful birdsong combined to make us feel as though we were on a completely different hike. Another change was the addition of huge sycamore trees. Several hikers commented on the stunning white colors of these old majestic trees glowing in the bright sunlight. The bright colors just kept on coming! Beneath the stately sycamores were vast patches of the dark green vegetation that once again set off the color contrast.

Before we knew it, it was time to leave the creek area and complete the loop near the trailhead. It is always enjoyable to see the sights on a hike like this, but it is especially enjoyable to hear the comments of hikers who are seeing these sights for the first time. For them, it is awe inspiring and an incentive to hike and see more. For the rest of us, it restores the magic!