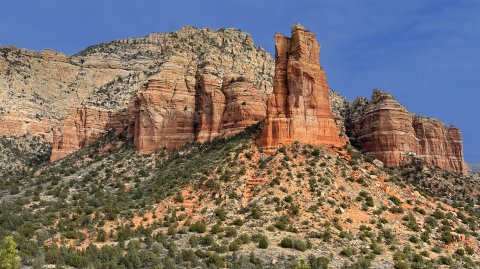 The beauty and mystery of Sedona Red Rock Country calls to artists of every tradition. They come seeking an understanding of this remarkable place through drawing, painting, photographing, sculpting. Through the artist’s eye, Sedona is a complex interplay of form, light, color, and texture; a masterpiece of its own essence. Capturing this essence, through the lens or with a brush, can be the work of a lifetime, and is asillusive as the alpenglow of a Sedona sunrise.

To the Westerner Drovers hiking Rabbit Ears Trail on February 6, there was no evidence of Sedona’s fabled beauty. We gatheredat Jack’s Canyon Trailhead and set out in freezing winds beneath a darkening sky. As our Hike Boss, Ray LaPorte, led us to the initial ascent, the trail immediately climbed into a lethallandscape of barbs, pikes, and spikes. Crown of Thorns, purple Prickly Pear, Agave, and the most menacing flora of them all, Catclaw Acacia. Further ahead we encountered a forest of twisted, charred Juniper trees, protruding from the barbed snarls of Catclaw. White Kaibab rocks, shaped like cow skulls and pelvic fragments, lay in junk piles all along the trailside. As the Catclaw branches snatched and sliced at our down jackets, welowered our heads and ploughed uphill into the wind, half expecting to see a cadre’ of flying monkeys, descending from the West.

Turning left onto Little Rock Trail, we traversed the hilltop and lost elevation as the trail wound through miniature canyons and mushroom shaped rocks. We followed slickrock contours to circumnavigate our Rabbit Ears destination, passing random displays of blood red chert, and black basaltic rubble. Like the other prominent rocks forms of Sedona, the twin spires of Rabbit Ears were sliced away, by millions of years of wind and rain, from the fragile, outlying edges of the Colorado Plateau. Simultaneously, the soft Hermit Shale mudrock beneath Rabbit Ears slowly melted away, triggering the rock falls that carved out its complex, vertical faces.

As we hiked uphill, Rabbit Ears slowly revealed itself. We sawthe horizontal layers of flaming color that inspire Plein Air painters to feverishly mix endless tints and shades of burnt sienna, cadmium, and ochre. We saw diamond cut rock faces, puzzles that no genius of planar analysis could hope to solve.And then there was the drama and nuance of light and shadowthat Caravaggio himself could not duplicate. We could not fathom how one might make enough sense of this visual spectacle to create a work of art worthy of it. Indeed, artists of integrity who have devoted their entire lives to mastery of their medium would most likely echo that sentiment.

Perhaps we are confounded by this visual problem because we seek to interpret a Sedona landscape that resides in the present, when the true essence of Sedona is about a living past. The negative space. What is not there. It is about the buildup of golden sand dunes and spongy marine life at the bottom of receding seas, followed by violent tectonic plate lifting, faulting, eruptions, and more layers of sand and silt. The Sedona that we can actually see is but the fragile remnants of fifty-million years of erosion and undercutting, whereby its filigree spires and arches float above the lithosphere, tethered by the most fragile of geologic threads. So much sfumato. A fleeting last glance.

Duly perplexed by a rock called Rabbit Ears, we Drovers headed for the trailhead to complete our six mile loop. About a half mile out we stopped to allow a small, fuzzy, black caterpillar to cross the trail. Two Red Rock Rangers happened along and joined usin watching the tiny creature boldly claim the right of way. It seemed like a moment of some significance, that we self-important humans, with our big boots and Jeeps and jobs, could, as a matter of course, show that level of respect and care to the smallest of beings. Soon the caterpillar would have its metamorphosis, and emerge with the spotted white wings of a Giant Leopard Moth. We marveled at how Sedona is in aconstant state of change and transformation. Paint that? We cannot. But it is in our nature to paint and hike and write, and even to hang upside down from Bell Rock if it means that we get to play a part in this amazing story. As the trailhead came into view, we imagined the Leopard Moth in in the coming spring, hovering above the perfumed fields of yellow Catclaw flowers, its blue, opalescent body glinting in the morning light.