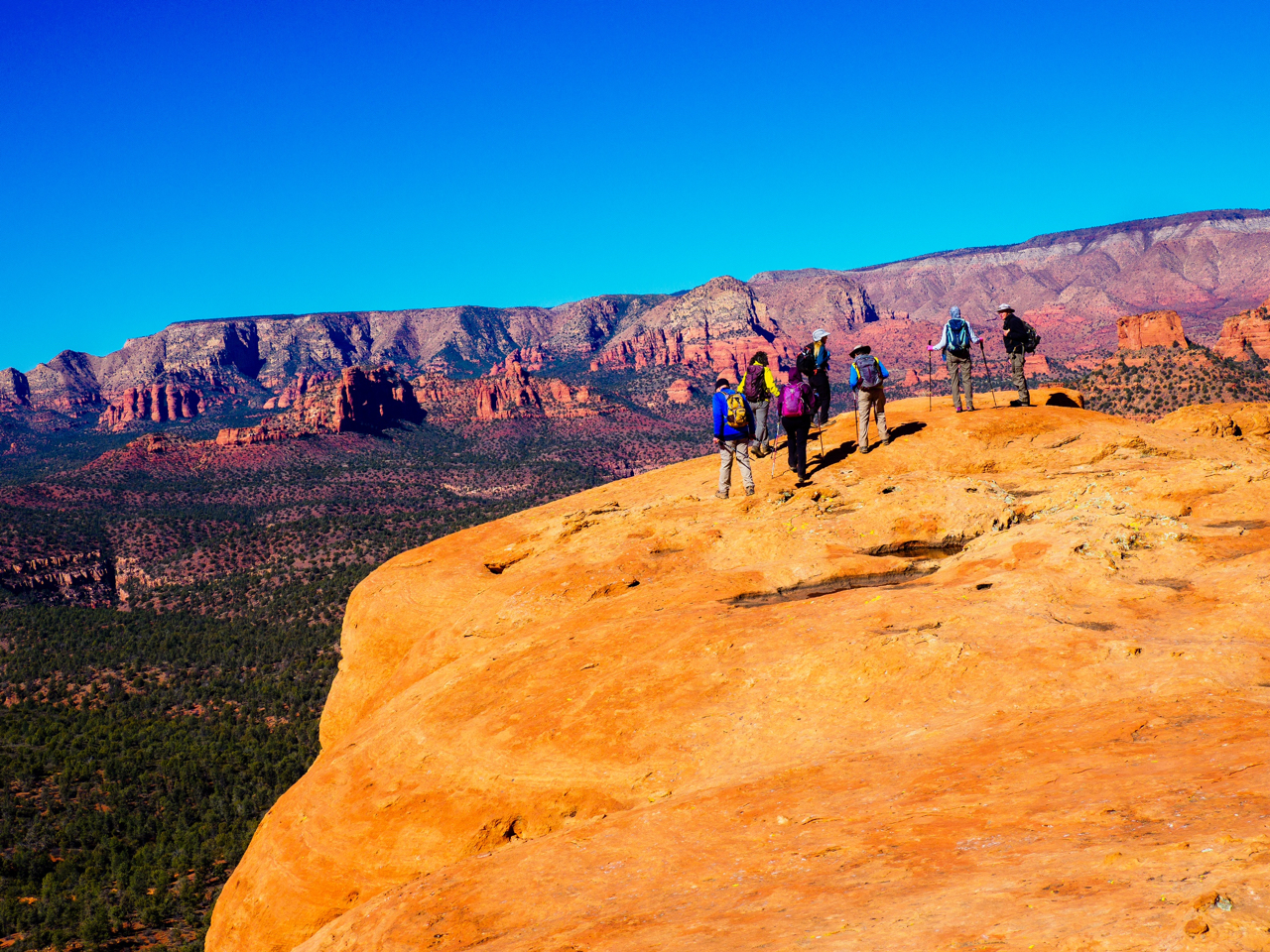 The Sycamore Canyon areaâs trails see much less boot traffic than those around Sedona, but the views are awe inspiring.

It was a very chilly morning when, dressed in winter hats, gloves, and coats, the Mustangs hiking group of the Sedona Westerners gathered in town before departing for the day’s hike. The destination was the Dogie Trailhead, located well west of Sedona in a very remote area, up on the bluffs above the Sycamore Canyon Wilderness Area.  Reaching the trailhead required us to caravan more than a half hour over unpaved, sometimes-gnarly, and very dusty Forest Roads through undeveloped, open-range territory. There were signs cautioning “cows in the road,” and indeed, we did see a long line of cows “hiking” along the side of the road, following behind their lead cow.

Upon reaching the trailhead and decamping from our vehicles, we split into two groups to avoid an overly-large group size on the trail.  Our groups, led by Jim Kemper and Dave Minott, then set off on the Dogie Trail at a spritely pace.  The hiking weather soon became pleasant as the sun rose higher in the sky, so off came the gloves, hats, and warm layers.

As we hiked up the trail, a red-rock wall began to rise to our right, and in it, we encountered an interesting cave. Exploring the cave, we found it to be unexpectedly large.  Given its accessibility and cavernous interior, we were surprised to find no signs whatsoever of past habitation.

Ascending farther up the trail, we reached the high bluffs overlooking Sycamore Canyon.  We found ourselves standing on the edge of a red-rock precipice, with shear drop-offs below and a breath-taking panorama all the way to the horizon.  In the foreground were numerous rock features shaped like domes and spires – some red, some white, and some a mixture. Also looming nearby was Casner Mountain, a massive, flat-topped mesa mountain. This mountain had originally been part of the Colorado Plateau, but erosion over the eons has left it a prominent, stand-alone feature. Occupying the entire west horizon from south to north was Sycamore Canyon, which is the second-longest canyon in Arizona; only the Grand Canyon is longer.  From our viewpoint atop the bluffs, we could see Sycamore Canyon’s colorful walls starting from where the Canyon begins in Clarkdale, then extending northward, to where the Canyon ends at the Mogollon Rim, just south of Williams / I-40.  Sycamore Canyon is a designated Wilderness Area, and is truly such.  Unlike most canyons in our area, there are no roads in Sycamore Canyon, so no vehicles can travel into it.  In addition, Sycamore Canyon has one of the world's rarest habitats, a riparian (river wetland) habitat found, most unusually, in the desert.

A number of Westerners hikes include an oddity encountered along the way.  So it was with this hike.  At the completion of one of our ascents, we passed through the remnants of an old wood and barbed-wire fence. And there, leaning against the fence was a big old truck or car bumper, its chrome finish shining brightly in the sun.  Our puzzled hikers were asking questions like, “just how did this get here, out in the middle of nowhere?” and “where is the rest of the truck – why just the shiny bumper left here?”  Not able to solve the bumper mystery, we moved on.

Next, we hiked to the top of a tall red-rock formation where we enjoyed a brief snack break while taking in the views.  Adjacent to our snack rock was a taller, prominent red-rock feature that we dubbed “The Beehive.”  This is because the rock looks from a distance to be a giant, red beehive -- a distinctive rock formation to say the least. Our final stop farther along in the hike was our lunch break, which we took atop a high red-rock promontory, affording a full 360-degree view encompassing Sycamore Canyon to the west, the Sedona red rocks to our north, and Mingus Mountain south of us.  As views go, it doesn’t get any better than this!

We then completed the return leg of our hike, ending back at the trailhead parking lot. From there, we caravanned back to Sedona over the dusty roads, a tired, but happy crew, grateful to be able to hike in a place so special as Sedona. As we saw no cows on the return trip, the cows must have beaten us home.