Rustlers Head North to a Smaller Canyon near Flagstaff 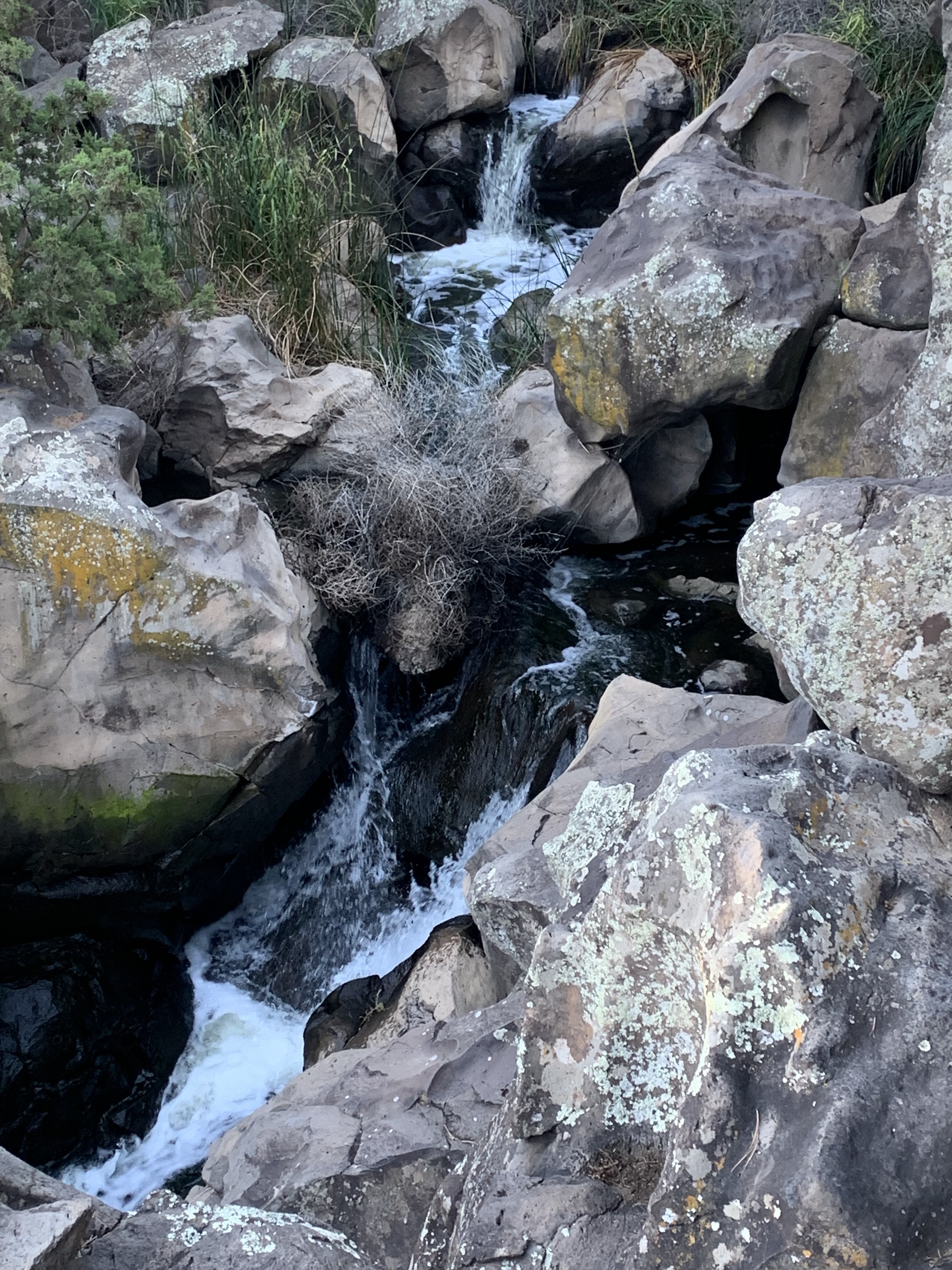 This summerâs monsoons have made parts of our area even more beautiful than normal. This burbling waterfall in Picture Canyon, near Flagstaff, is a perfect example.

The Sedona Westerner Rustlers gathered at the Posse Grounds early to carpool to Flagstaff to hike Picture Canyon. This perfect early season hike is in the cool pine and considered an easy hike of about 4.6 miles and 360 ft of cumulative elevation gain. As I was the leader, and Flagstaff resident, I met the group at the trailhead. Deb Hicks, as tailgater, made sure the flock stayed together.

Picture Canyon Natural and Cultural Preserve is a natural and cultural area set aside on the east side of Flagstaff. There is scenic beauty to behold, after all, and everyone likes a waterfall. There are cultural sites from the Northern Sinagua living there around 1000 years ago. Picture Canyon is named for the petroglyphs seen etched into the basalt walls. Harold Colton, the founder of the Museum of Northern Arizona, made an extensive study of the petroglyphs and surface sites and recommended that the area be protected. According to the city’s website on Picture Canyon there are over 126 panels. A few sites are marked for viewing.

In 2008 Picture Canyon was listed on the National Register of Historic Places and in 2012 the City of Flagstaff bought the 478 acres for 4.8 million dollars using voter approved funds at a public auction. Previously the area was used for water discharge into the Rio de Flag canyon from the Wildcat Wastewater Treatment Plant. At that time the canyon emptied into a straight channel. Two important developments were part of these arrangements. The original meander was re-established and Wildcat agreed to provide water year-round for the wildlife.

Our group met at one of the 2 parking areas. Note: there is a port-a-potty at the upper parking area. Also, at the upper parking birders can pick up a checklist for the 130 or more birds seen in the Preserve. Our first stop was at some information boards explaining the natural and cultural history of the area. There are several well marked trails but I picked a longer figure eight route which would take in the important stops but also give Sedona hikers a chance to walk through the majestic Ponderosa pines.

We began on Tom Moody trail to the left just past the info boards to walk up a dirt road along the north side of the canyon. Then we switched to the Don Weaver trail to descend into the canyon. We crossed over the Arizona Trail (AZT) to head downstream to several petroglyph sites with information boards to help spot some of the “pictures.” Our hike continued downstream and rejoined the Tom Moody trail which we took to the north through the Ponderosas.

At the AZT intersection we had to make a momentous decision - hike toward Utah or Mexico. I opted to head south. This portion took us along the equestrian bypass of the Arizona trail. We dropped into Picture Canyon again and crossed the Rio de Flag and ascended the other bank. Sometimes there are beautiful orange dragonflies flying around the water course.

We turned off the AZT to walk an old railroad grade from the logging days around Flagstaff. Flagstaff had several logging companies operating in its early years. Typically, a company would decide where to log and build a railroad bed into an area. When they were done, the crew would pick up the rails and move to a new area. We hiked along one of those beds to the rim of Picture Canyon to view the waterfalls. This part of the rim is a great place for a rest and a snack. Just after leaving we stopped at an info board explaining the trestle bridge which used to traverse the waterway. Soon we were back at the parking area.

I have heard comments from Sedona Westerners about how green the area is. The riparian canyon bottom is always green and this season has had exceptional wildflowers.

There is much to discover in Picture Canyon.

The Sedona Westerners always welcome new members, and we have hikes multiple days of the week for all abilities. If you are interested in joining the club, please visit our website at sedonawesterners.org. You will find an interesting history, the whole season’s list of planned hikes, and a handy membership link. It only takes five minutes to sign up and start your new adventures here in the Red Rocks.