Adventures of a Novice Hike Boss 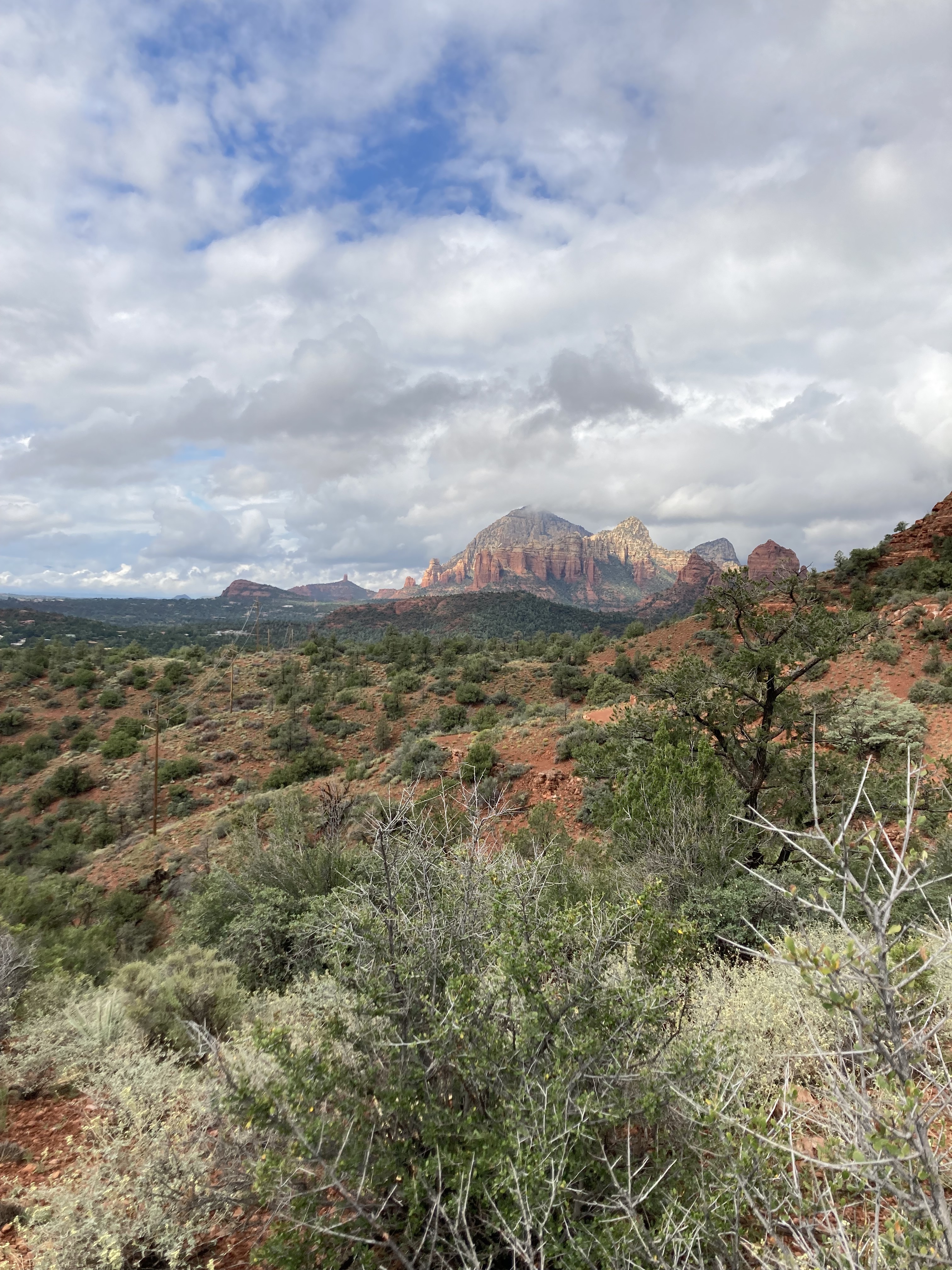 Even with extremely rare foreboding clouds and a threat of rain, Sedonaâs landscapes can be magnificent. Here, Thunder Mountain is highlighted by a lone ray of sunshine.

Saturday September 10th was the first hike of the Westerner Rustler’s 2022/23 season and my first hike as the newly minted Rustlers hike boss.  My original idea was to do all the first of the season hikes scheduled for September in Flagstaff to benefit from the cooler weather at the higher elevation

So, who would have guessed that it would rain in September?  As clouds gathered over Flagstaff on my weather app it looked like a change of plans was in order. The Jim Thompson trail came to mind, and after I got a bye in from my hike leader, we ended up changing the schedule the Friday evening before the hike.  Of course, by then the clouds were moving over Sedona but showers weren’t expected until the afternoon so the risk of getting rained on was slimmer.

Saturday morning as I pulled into the Posse Ground parking lot for the group meet-up a total of two people were waiting for me--one of whom was my hike leader.  I’ll never know why so few people showed up for my opening hike but while we were debating the merits of using the Midgley bridge trail head parking, which didn’t require a high clearance vehicle to access, two more hikers arrived in a Jeep equipped for off road driving.  We were able to all fit in their Jeep and headed out to the Jordan parking lot to start the hike.

This would be an out and back hike and if done from end to end traverse six and a half to seven miles.  The Rustler’s hikes are expected to be four to six miles so I had scoped out a turning point during a July hike that would be about a five-and-a-half-mile hike.

The Jim Thompson trail follows an old wagon trail built by non-other than an early Sedona settler named Jim Thompson who used it to move his products to market.  It can be accessed from the Jordan trail parking lot or from the Wilson canyon trail starting from the Midgley bridge parking area.  It’s wider and while rocky well graded by the standards of most Sedona trails.  The hike is easy but the road it follows looks out at some great views over Sedona.

About a quarter mile after accessing the trail at the north end of the Jordan parking area we get on what looks like the old wagon road, and we quickly start an ascent of several hundred feet which is the main climb for this end of the trail.  This is a pretty trail with many shady areas and views out across Sedona. It takes a west to east direction from our starting point and follows along a large area of rock to the north known as the Steamboat.  To the south of the trail the ground drops down and we have a view out over Sedona.  We don’t have a 360-degree view since Steamboat is hulking behind us, but we can look to the west and see Chimney Rock and Thunder Mountain and scanning southwest see as one hiker noted “yet another great view of Cathedral, Court House and Bell rock”.  Directly south we’re looking at the Snoopy and Lucy rock formations and to the east is Wilson Mountain.

As we hiked, we crossed several places where the south edge of the trail had steep drops offs overlooking deep rocky washes.  Our hike leader, Linda Schermer, a resident and club member since 2000 and a history buff, pointed out the parts of an old automobile in one of the washes which she had been watching for.  It turns out washes were considered a good place to dump unwanted old cars.  All that was left in this wash was an old engine block and some sheets of metal from the body.  Reflecting on this information I realized I’ve seen old car scraps on the HT trail, an actual automobile in the wash along the Carrol canyon trail, and of course there’s the old car sitting by the old dump in Cultural Park.  Being over 50 years old all these items are considered artifacts and can’t be moved.

A little over two and a half miles into our hike we reached the turnaround point which is where the trail steeply drops down to meet the Wilson Canyon trail.  After finding a rocky area off the trail to sit down and enjoy our snack break, we shared some personal history about where we were originally from before moving to Sedona.  We also talked about the weather, which turned out to be perfect for hiking.  The forecasted rain had brough an adequate cloud cover to block direct sun keeping the temperatures from being too hot.  Anyone who hikes during Sedona’s summer months knows the blessed value of clouds, and any shade available along our trails.  There was a complementary breeze blowing to add to the cooling affect and a few sprinkles of rain on our return hike.

As always for me, the return part of a hike seems shorter than the outgoing part.  Jim Thompson was no exception with the added benefit of being mostly downhill.  Despite covering the same ground, the perspective is different, and I always find there’s something I missed along the way out that adds an ah-ha moment to the trail back.  On today’s hike the clouds put on a fantastic display looking out towards West Sedona.

Finally getting back to the parking lot we all climbed aboard our transport, thanking the driver for braving the rocky Jordan road.  We also congratulated ourselves for facing down the potential wet weather to have a great hike.

The Sedona Westerners always welcome new members, and we have hikes multiple days of the week for all abilities. If you are interested in joining the club, please visit our website at sedonawesterners.org.  You will find an interesting history, the whole season’s list of planned hikes, and a handy membership link. It only takes five minutes to sign up and start your new adventures here in the Red Rocks.