The Westerners Rustle Up Some Turkeys 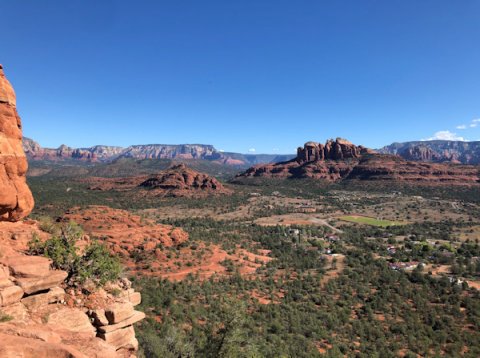 Turkey Creek trails can provide some amazing vistas. Todayâs adventure produced a view of Thunder, Wilson, Cathedral, and Munds framing the valley below.

To be honest, this was only my second “official” hike with the Sedona Westerners. I arrived in the VOC in early June, just in time for the first big heatwave of the season. I learned about the Westerners from the first person I met in town. Knowing the season wasn’t going to start until September, I sought out other hiking groups so I could get familiar with the trails around Sedona.

I found a group online and attempted to meet up with them at the trailhead. Unfortunately, when I got there, the parking lot was full and I could see no sign of the group of hikers I’d never met before. I drove on and circled around to another parking lot nearby and decided to hike alone. A friendly face appeared at my car window and asked if I was with the Westerners. I said no, but that I would like to be. I hiked with this informal group of Westerners that day, and started making new friends. That is how I found the Sedona Westerners hiking group, or more precisely, how they found me.

For the Turkey Creek Trail loop hike we met up at the lower trail head parking lot off Verde Valley School Road at 8am. Although some people carpooled, our group used many of the available parking spaces. After everyone signed in, and the rules were read out loud, the trail leader began to describe the trail. He pointed to a distant hill with a small saddle saying that was our destination. The hike had been described as 3.7 miles with some rock scrambling required. Hiking poles were recommended. Looking out at the rock we were planning to scale, it felt like that was going to be more than three miles.  But off we trekked.

We decided to split up into two groups. I was in the first group and we headed down the path.  Ray LaPorte and Sandi Heysinger were Hike Leaders for this morning’s adventure. Having trail leaders who know their way and who look out for their hikers is a comfort for both seasoned hikers and the newbies like me.

The trail was like others I’ve been on in Sedona, strewn with small to medium-sized red rocks. At one point we had to straddle a section of the trail that had formed a narrow culvert due to the summer monsoon rains.

As we looked out over the lush green hills to the west, our trail guide pointed out a white house in the distance. To the left of that was a smaller house that blended in with the landscape. The smaller house had been home for a short time to Wiley Post a famed aviator in the 1920’s. Post, who was blind in one eye, was known for many aviation feats and had developed a pressurized suit for early air flight. He is also remembered for his fateful flight with humorist Will Rogers as they were touring above the Artic Circle in Alaska in Post’s plane, before crash landing near Barrow – tragically ending both of their lives.

The trail began a steady ascent from there and climbed toward the base of a set of spires. The trail leader pointed out the small “bench” in a shaded area off the trail. We were told that if we did not want to do the rock scramble to the top of the saddle we were welcome to wait there. Several of us suggested we’d like to see the rock scramble before deciding, so we headed up the hill. There, with the grey rock ledge above us we were given a second chance to opt out of the rock scramble. Several of us were still cautious, but willing to give it a try. And up we went.

On the saddle we were able to fan out and take in the vistas - the Verde Valley School with a paddock of horses grazing on their morning meal with Cathedral Rock in the background. To the west, rolling green hills and red rocks. A narrow ledge ran along the backside of the tall red rock. Several yards down the path we found some rock climbing ropes and noticed several pitons attached to the rock face. I looked both up and down to where the climbers would ascend the rock – it was steep in both directions.

We disturbed a small tarantula resting on the hillside. The tarantula tried to hide under a small green plant, but then emerged to give us a better look.

As we explored the top of the saddle, with views on either side, I thought back to the beginning of the hike when this spot seemed so far away and smiled that we had made it to the top.

As predicted, the climb down was a bit of a challenge.  Once again with patience and skilled guidance, one by one, we all made the climb down from the saddle, collected our hiking sticks, and descended back to the first bench.

The next section of trail was strewn with small rocks. All along the trail we stepped over and around myriad pine tree sprigs that had mysteriously appeared on the trail.

We encountered several mountain bikers. Despite the large, round wheels on his mountain bike, one rider nearly looked like he was riding in place as he slowly peddled his way up a steep and rocky incline. I was glad to have both my feet on the ground.

Before long we were back on level ground, our two groups reunited in the parking lot. We could now proudly say we had done it!

The Sedona Westerners always welcome new members, and we have hikes multiple days of the week for all abilities. If you are interested in joining the club, please visit our website at sedonawesterners.org.  You will find an interesting history, the whole season’s list of planned hikes, and a handy membership link. It only takes five minutes to sign up and start your new adventures here in the Red Rocks.