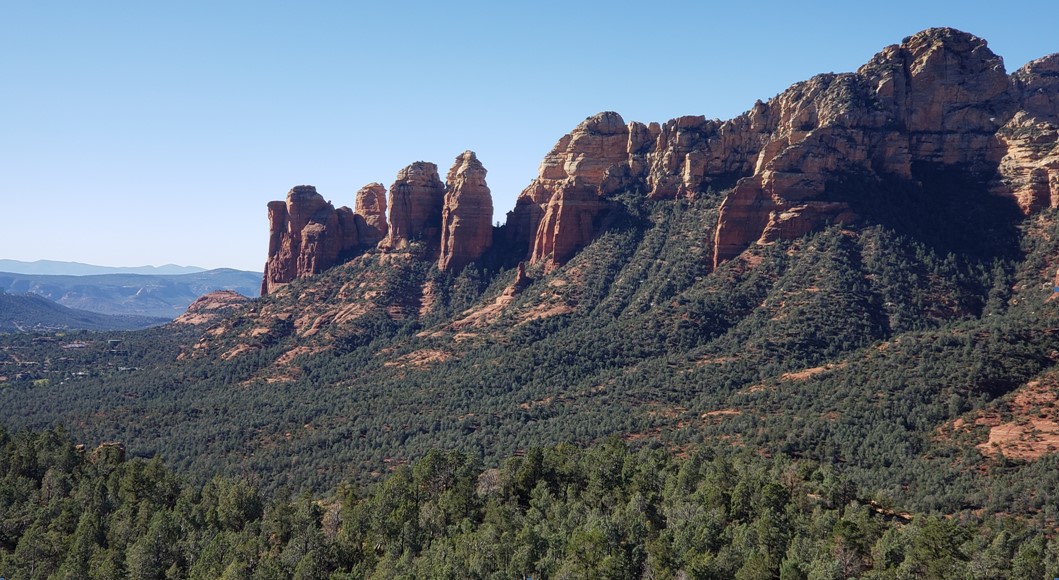 The final assault up to Brins Mesa can test your meddle, but the view from atop is beautiful in all directions. Here we look back towards Sedona on a beautiful fall day.

Shortly after 8am, with cloudless blue sky and perfect early morning temperature, the Ambler hiking group started the hike to Brins Mesa from the Jordan Road trailhead. It was cool enough that most hikers wore an outer jacket or windbreaker. The hike up to the mesa is considered to be a moderately challenging trail, with the upper end putting the adventure at the upper end of difficulty that Amblers expect.

Due to the recent monsoons, the pinon and juniper trees seemed to have a much brighter green than usual as we hiked the gently rolling approach to the steep climb to the mesa. By the time we reached the beginning of the climb, the increase in temperature and anticipation of the long, steep ascent had everyone making clothing adjustments, removing jackets and windbreakers.

Our pace slowed as we started the climb and several stops were made as we went up. Some said it was to appreciate the views behind us as we gained elevation, but it was mostly to allow some hikers a break to catch their breath. And the views behind us were spectacular. We continued up the steep trail and those of us who had hiking poles made good use of them to help with the climb and maintain balance.

Upon reaching the top of Brins Mesa we stopped to allow everyone to recover from the climb, then continued a short distance further along the trail to our snack and lunch stop. The location of our lunch stop allowed us to view 360 degrees of the amazing red rocks above us and juniper and pinon forest that cover the valleys and slopes around us. As a reminder of past fires, we could also see remnants of the 2006 Brins Fire sticking out above the healing new growth that hid most of the damage.

Before beginning our descent after lunch, we made a grisly discovery of the skeletal remains of what might have been a coyote or javelina under a juniper tree. The missing skull provoked much discussion as to what animal it was. After taking a few pictures we began the long trek down. Here again hiking poles were used to safely make our way. Even though the hike was longer and somewhat more difficult than typical Ambler hikes, everyone thoroughly enjoyed it.

As with every hike, we have a variety of conversations covering myriad topics. The topic of the name Brins Mesa came up, and how it came to be.  Legend has it there was a brindle bull that roamed the environs for many years…and his name was Brins.  He was a pretty lucky bull to have this beautiful mesa named after him.

The hike took a little over 4 hours and ended up being 5 miles with an 850 foot Cumulative Elevation Gain. It was a perfect day for a Brins Mesa hike.  We thank Dave Vanderwater and Hassan Hosseini for leading the expedition.

If you are a beginning hiker or a newcomer to the Sedona area the Amblers hiking group of the Sedona Westerners do easy to moderate hikes which typically covers 3 to 5 miles and lasts less than 4 hours. They hike at a leisurely pace with enough pauses to enjoy the fabulous red rock scenery.