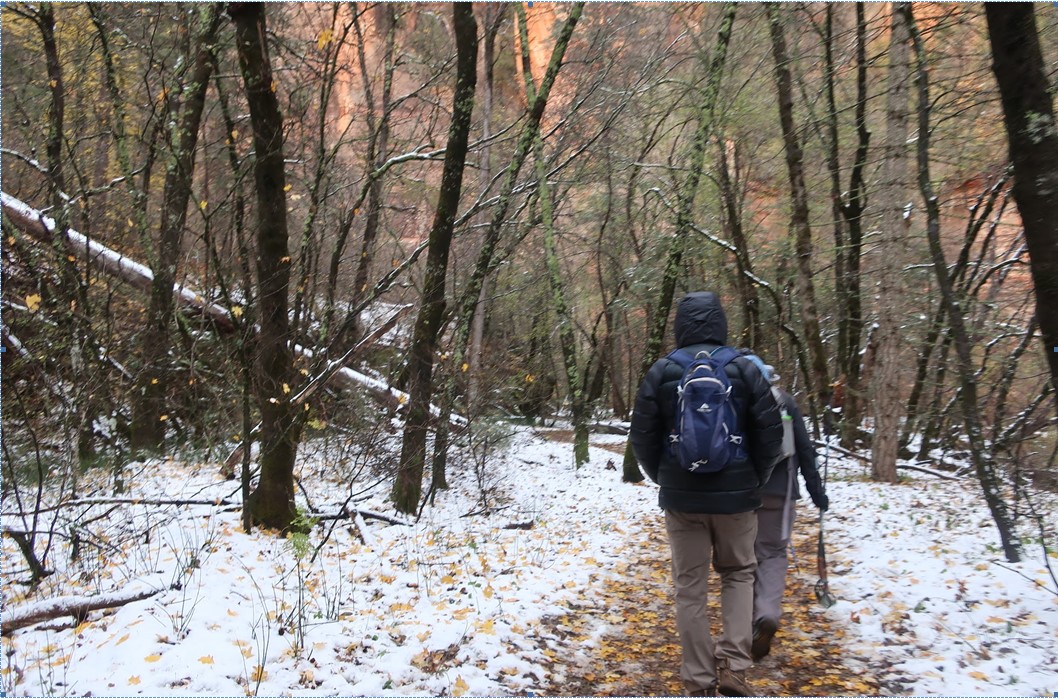 Where did summer and fall go? It seems like just yesterday we were hiking in shorts and t-shirts. Today we were in parkas following a snowy path up West Fork

There is something truly amazing about getting on the trail early on a chilly morning. The frost still clinging to the leaves as we stepped across the icy footbridge at the start of the trail. Someone said it was 29 degrees and we soon learned there was snow still on the ground from the cold front that had moved through on Thursday. In town there was little evidence of the snow, but here on the West Fork Trail, the snow and ice still remained. Most of the trees had dropped their fall colors and the ground was strewn with red, orange, yellow, and green leaves. Even so, we would be surprised with a spattering of trees along the trail still brilliant with reds and yellows, the last of the fall foliage but nonetheless stunning.

There was a handful of us who braved the cold and snow that morning, each second guessing how many layers of clothes we would need. Gloves were essential, and hats, too. We were thankful it wasn’t windy.

Our trail leader, Hassan Hosseini, gave us a run-down of the trail. Elevation gains would be minimal, but there were 13 creek crossings. We had been advised to bring poles to help navigate the slick rocks at creek level.

With each crossing our confidence grew but some were more challenging than others, including one crossing with a large rock that we climbed over going out. On the way back, many of us simply chose to walk stepping on water-level stones around the base of the rock even though there was a risk of getting our boots wet. Few of us returned with wet shoes though.

While most of the group had hiked West Fork before, this was my first time hiking through the canyon. Even the trail veterans marveled at the tall stone walls that rose above us several hundred feet. It was still early enough that the sun didn’t reach the trail floor and large patches of snow hugged the ground creating the feeling of an early winter wonderland.

We encountered other groups and couples along the trail, sometimes playing an informal relay up the trail, passing them, and then being passed by them again. A few couples made their return trip surprisingly quickly, only to be told they had not completed the whole trail.

We pressed on, happily. Crossing the creek, climbing the rock inclines, and stopping occasionally to simply admire the scenery.  Having crossed the creek for the 13th time we made it to the narrows of the canyon. I was told on warmer days one could continue on the trail through the creek, the water reaching your knees or up to your waist depending on the water level. A nice way to cool off in the summer. No need to cool off today, however. Most of us had kept our gloves and hats on. Only a few minor “clothing adjustments” had been necessary so far. We stopped for a snack break and to take pictures of the canyon and Oak Creek.

We found the sun was starting to peek down the canyon on the return trip, catching sunny (and warmer) patches along the trail. We also encountered more hikers. A raucous hiker howled at the water’s edge, threatening to jump into the creek. His friends didn’t believe he would. He didn’t while we were near, and one can only hope he didn’t take the plunge into the chilly water.

“Bio breaks” were rare on the hike. There just aren’t that many hiding places along the trail - and it became increasingly difficult to find a secluded spot especially as the hiker traffic increased.

As we came to the end of the trail, near the 26th crossing the creek, we passed a couple we had seen several times along the way. One of our crew had nicknamed the young man, “Tripod” for the collapsible tripod and professional camera he had carried with him on the trail. He was setting up a photo shot with his female companion and we apologized for photobombing his shot. He smiled and said we were fine. We left them to their own, and I looked back as he took a shot of his companion.

Crossing the foot bridge toward the parking lot, the snow and ice had melted into a thick brown mud. The temperature was now in the low 60s, a change of 30 degrees since our early departure. Gloves and hats were finally coming off after our hours-long hike.

Back at the parking lot, we beelined to the public restrooms, a necessary end to a successful hike. We bid each other adieu, vowing to see one another on the next hike. What a wonderful way to spend a chilly Saturday morning!