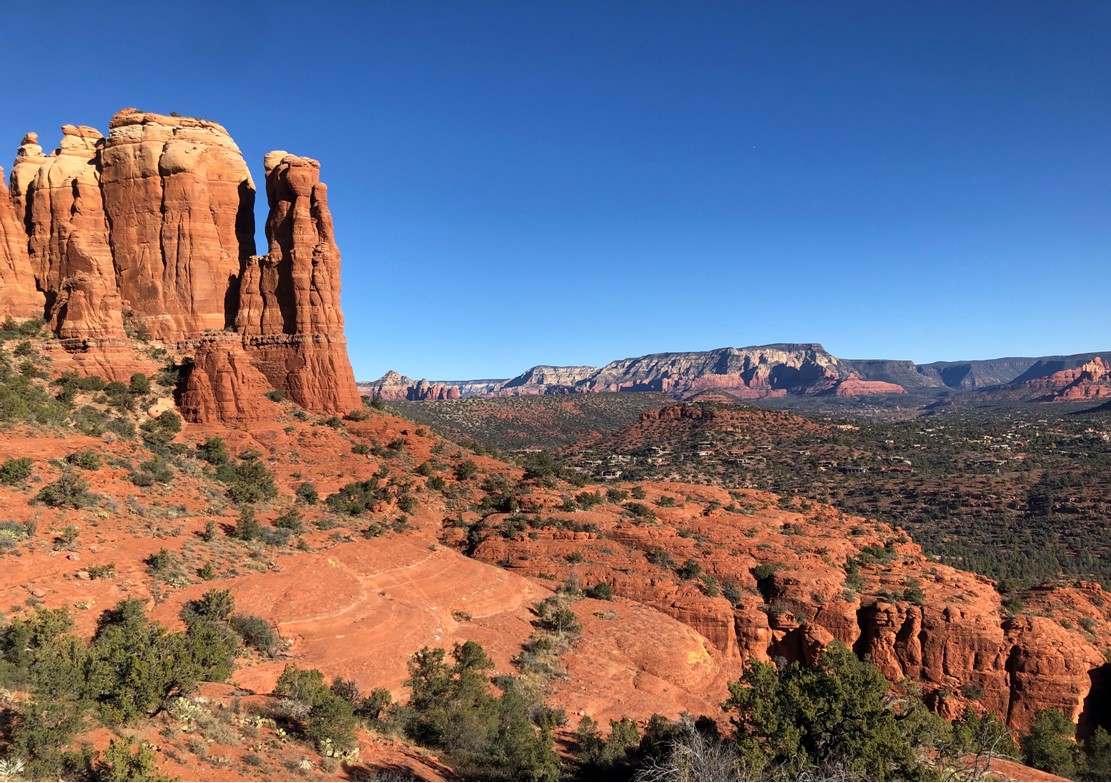 This morning’s adventure started at the Yavapai Vista trailhead.  Given the crowded parking area just a few days prior, we decided to start a little early.  Instead of cars, surprisingly we found an almost empty parking lot but a very chilly shade as the sun still hid behind Munds Mountain.  Folks were quickly adding layers of clothing, and two intrepid souls who normally hike in shorts even had long pants on.  It was just a smidge above freezing.

Seeing the possible warmth of sunshine up on the Hiline trail, we quickly read the rules, discussed safety and the route for the day, and formed into two groups.  Crystal Marty would lead the first group, and Amanda Maxwell had the second.  Today was my day to be tailgater.  In short, I had to exercise my math skills periodically during the hike to make sure everyone was still there and things had not been left behind on the trail.

Navigating the labyrinth of trails in that area, we headed up to the junction of Hiline and on up the hill…the shadow line still beckoning us. After about 250 feet of elevation gain we were squarely in the sunlight, and with that warmth, the layers of clothing just added in the parking lot were coming off, destined to ride the rest of the day stuffed in our packs.

I tend to rate Sedona hikes on a view to effort ratio.  A trip with a good view with little effort is a high number.  A regular view with lots of effort a low number, and so on.  Hiline is one of those great “bang for your buck” hikes in that there are stellar views in many directions, with only moderate effort to get up to the main part of the trail.  It rates a very high number, and today it did not disappoint.

As we traversed along the trail heading towards Cathedral Rock, we could see many little ant people starting to crawl around Bell Rock.  Around the bends, sometimes still shady and cool, we were treated with views of 179, the Airport, Wilson, Thunder, Cathedral, and eventually the Turkey Creek area and land in the valley along Verde Valley School Road.

Thanksgiving dominated the conversation along this section of trail, with a plethora of activities being discussed.  Traditional turkey dinners with friends and family were the overall favorite, but there were a few that enjoyed the special holiday meals of Verde Valley area restaurants and even one brave soul who attempted his first fried turkey. It was such a success; he is supposedly out looking for another one to do.

After more clothing adjustments near the intersection of Hiline and Baldwin trails, we enjoyed our snack break on the flanks of Cathedral Rock. Cathedral is mesmerizing from all angles, but from the southeast, and up close, you get a full appreciation of the spires and features that lie in between them.  A beautiful deep “Sedona Blue” sky certainly enhanced the views.

Next we made our way to Templeton trail.  Poles were definitely a help in this portion.  The use of poles is an interesting topic.  There are members who use two of them at all times, two poles only when descending, just one pole, and some that never use poles.  Whatever your reasoning, it sure can be handy to have them.  I use one pole coming down steep descents, and I know there are times they are doing nothing more than just lightly touching the ground…but the peace of mind they offer is comforting.

Merging onto Templeton, we started our trek back to the parking area.  This section can be a mecca for mountain bikes, but today there were only a handful.

Before joining Slim Shady, and observing numerous scat offerings, there was considerable discussion of animals and birds we had recently seen at our respective homes.  Deer families and Javalina squadrons seem to dominate the wildlife sightings, with many reports of hummingbirds.  One of the stories included Javalinas that regularly stroll near prickly pears, near the house, and strip the fruit off the paddles.

Arriving back at the trailhead, we thanked our leaders and said our goodbyes after a wonderful 5-mile excursion with about 900 feet of elevation gain. As tailgater, it was a victorious day since we arrived back at the trailhead with the same number of hikers we left with.  Visits were short, however, since there were many cars lurking for our coveted parking spots.